A man of the cloth and the steel he wields
munk
From the Desk of Reverend Munk, Model T Computing, The Laptop Collection
1 Comment 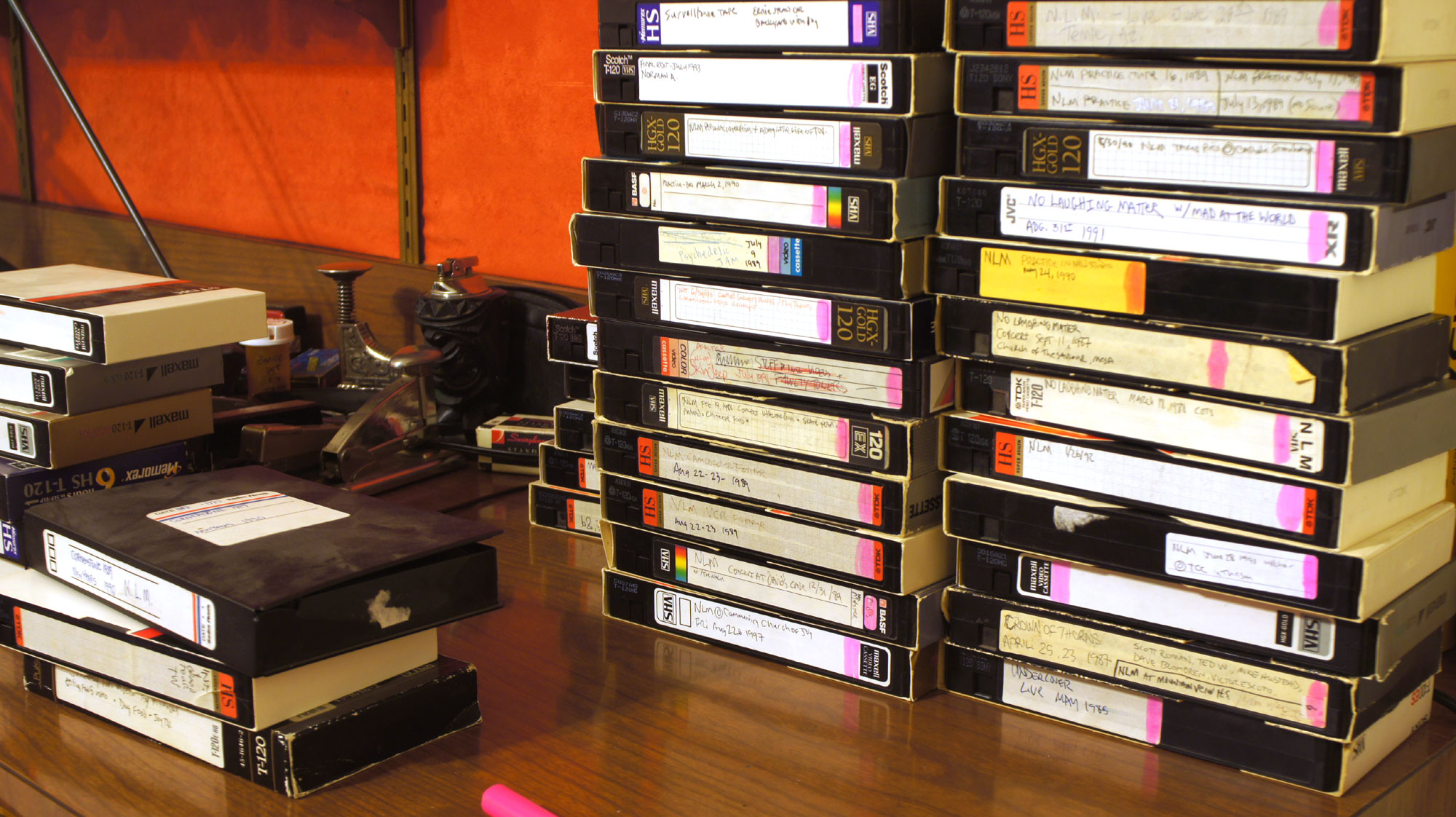 Towers of Tapes digitized, and I burned up one VCR already, but remembering a lot that I forgot. Speaking of which, I forgot to review this Quickpad Pro after I got it, although I made a few false starts. I forgot a lot that I had learned about the machine over the year that I’ve had it, but I have a pretty solid impression about its worth as a AA-Battery-Powered Writing Machine – a class of machine I’m selectively collecting and rating. This is a timeslipping review, then, and timeframes are noted. 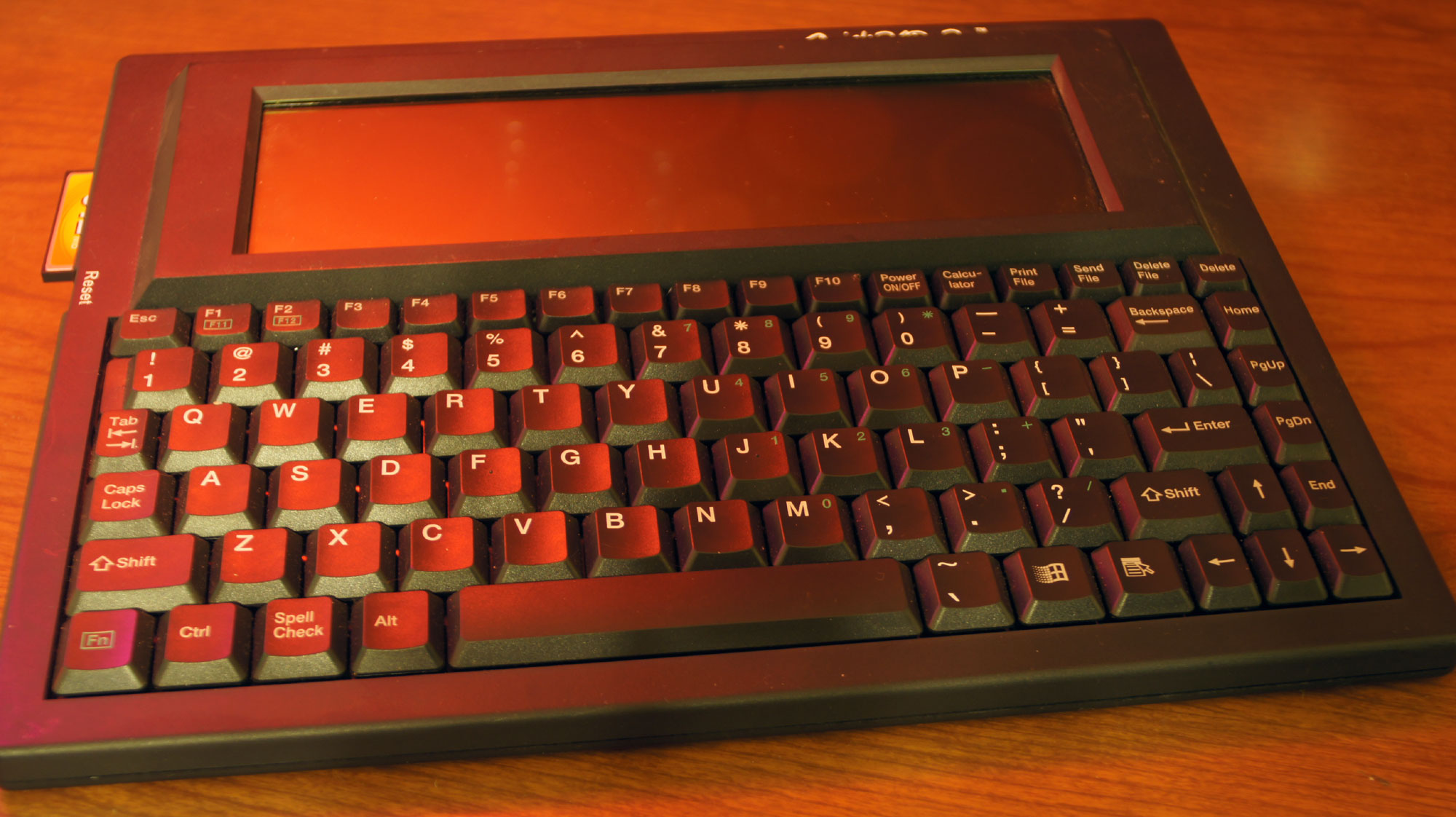 This is a test of the Emergency Broadcasting System. This is only a test. Switching the font to the tall 8-line mode does make the text much easier to read on this Quickpad.

So, the Quickpad Pro takes a couple seconds to boot up, slightly slower than the Neo because it has to load BIOS and MS-DOS then execute AUTOEXEC.BAT like a good old DOS machine does. It’s fast, though – you’re into the main menu in just a couple of seconds. From there, the cursor is on the “Word Processor” option, you hit enter to get to the screen where you choose a file to edit or make a “N”ew one, then you hit <enter> again and you’re in your file.

The point I’m trying to make is that workflow on a Quickpad is the same as it would be on an old DOS computer. If you’re used to the “Instant-on, instantly in the last place I left off” workflow of the Alphasmart machines, you’ll find this workflow cumbersome. The Quickpad doesn’t automatically save your every keystroke. You have to remember to <alt><f>-<s> every now and again, and you have to save and close files before powering off. That much right there is a strong negative if your goal is primarily to use the Quickpad as a writing machine. If that’s your goal, I recommend an Alphasmart Neo or Dana.

However, the Quickpad does have some things going for it as a writing machine. The ability to run early DOS versions of Wordperfect and Word, for instance, if you have a fondness for those old DOS word processors. The ability to use programming languages in a commandline environment is also quite attractive, should you need the machine to perform specialized data entry tasks. It’s got a pretty nice but somewhat stiff keyboard that is a bit more compressed than the Alphasmart one – many keys are smaller, which could be a problem for touch-typists used to a full-size keyboard.

Also notably Alphasmart-like is the text transfer method of the Quickpad Pro. You just hook up a USB cord and open up an empty textfile on your PC, then hit “Send File”. This causes the Quickpad to emulate a keyboard and type your text into the open file on the PC, just like the Alphasmart. The Quickpad does have the advantage of being able to write to a DOS-formatted CF card, though, and you can transfer files that way too. This is analagous to the Alphasmart Dana’s SD card slots, and allows basically unlimited storage on the machine, where the Alphasmart Neo is stuck with the storage it has on-board (not that you’re likely to run out of storage on a Neo). 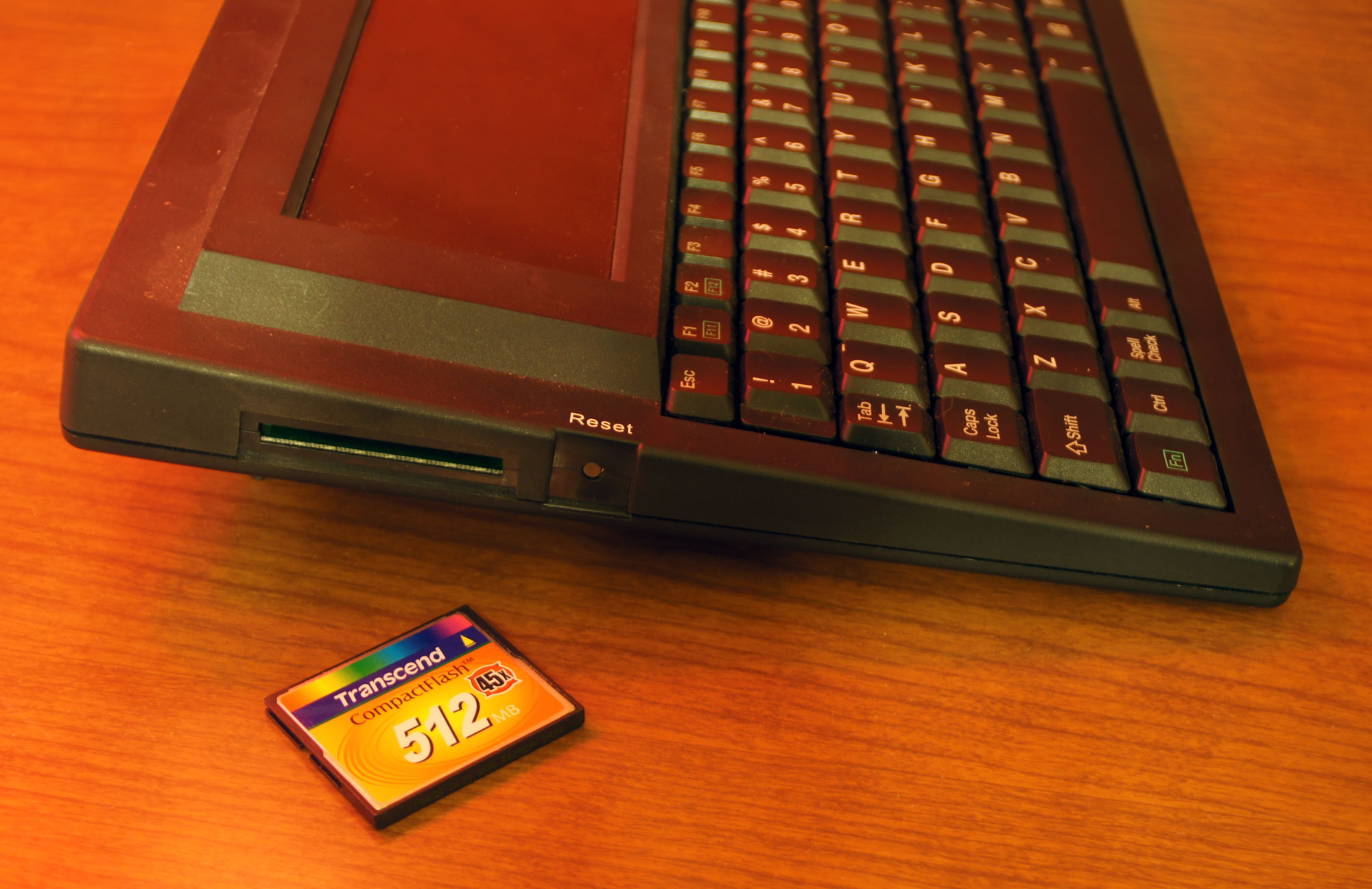 Several days later, the Quickpad Pro is still running on the same batteries. We’ll give it a solid week before passing judgement on the battery life.

Well, it has been quite a few months since I picked up this QuickPAD Pro on eBay real cheap ($30 shipped). I was intrigued by its sort-of MS-DOS operating system and CF card slot.

When it came in the mail, I put in some batteries, booted it up and messed around with it a bit, learning how it works and trying to install various hacks to test how MS-DOS-like the OS really was (answer: not very). Then I put it away and forgot about it awhile before I could really do a review. On the plus side, many months later the batteries I put in are still going strong, so this unit doesn’t draw any power from the cells while in storage, or at least not much power.

Whoops, it’s been almost a year since I last fired this puppy up, and my files are still here, including this partly-written review. The batteries I had in here were dead as doornails, so losing power doesn’t seem to erase the files, because I’m pretty sure these were stored in the internal memory rather than the CF card. If so (and I’ll check to make sure, but I didn’t see them on the CF) then that’s another big plus for the Quickpad. If not for the poor screen angle (Quickpad could learn something from the Olivetti M10 in that area) and comparatively stiff keyboard, I might rate this thing a bit closer to the T200 as a less-distant third place in my pantheon of AA-powered writing laptops.

I was initially attracted to the machine for its large screen and DOS compatibility. For the price I paid, I don’t feel let down very much by its inability to run very much DOS software, or any version of DOS other than its built-in 2.2-ish version. At least I can copy that system to the CF card and boot from that – and also I somehow got Perl to run on this machine, so there’s that. Maybe I can get Qbasic to run too.

Wow, ok. That’s probably why I held onto this thing for a year – but why didn’t I pursue this interesting “programming toy” avenue more fully? Oh yeah, it was 2017 and we all know how that went. All I can recall now is a shimmering image of my stainless steel .45 automatic Hardballer blazing in the winter morning sunlight, stinking of cordite and copper. Somehow that all culminated in twenty-some typewriter repair bibles and various compilations and a Delta version of TWDB, abandoned in favor of the current under-wraps in-flavour “Epsilon”. You’ll never find Delta, it was much too plain. I learned quite a bit from that abortive effort, though, much of which morphed into Epsilon. TPV made the cut, somewhat. It’ll be an available view, but a slightly modified Classic Grid view dominates the front page. You may have noticed that I have updated Beta style-wise to give us a taste of what to expect.

Oh, that’s right, I was actually reviewing this Quickpad Pro. Good gravy, do I ramble on. Anyway, I note that when I start fading into memory and stop typing long enough, the machine goes to sleep – however, when I power it back up, it instant-ons right back to where I was before exactly like the Alphasmart Neo does. That’s a plus. I didn’t notice that before because I kept getting distracted by DOS. I’ll count that distraction as a minus because on the Alphasmart there is nothing to distract me from writing. If I’m honest, my Tandy 200 also gets a minus here. Just too many ways I can use it other than to write with. (but, oh – that keyboard!). This really is the reason I would pick the Neo over all of my other AA-powered writing machines.

Still, I wonder if I could get BitCom to run on this Quickpad and talk to the USB port… :D 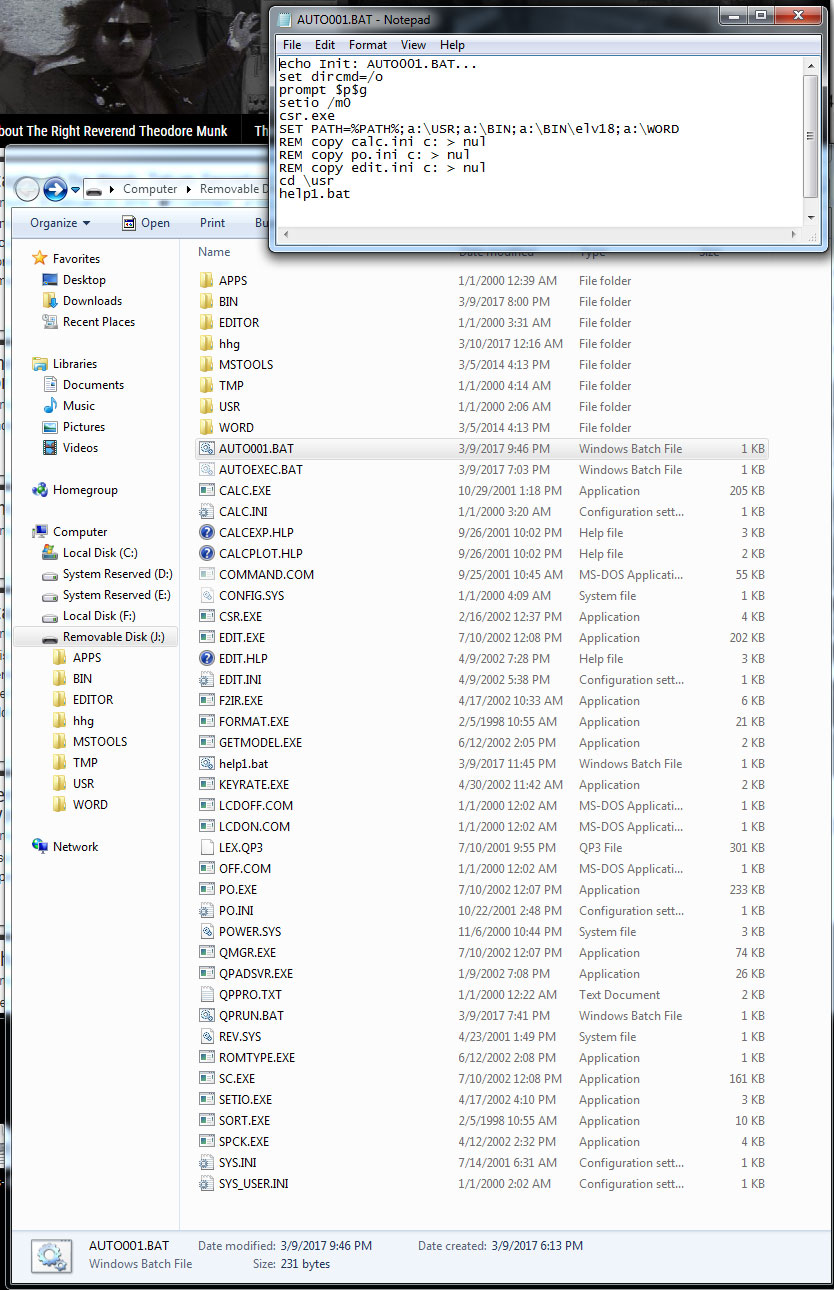 (man, I must have tried a lot of stuff on this machine a year ago, the CF card is packed with a pretty customized DOS environment with a rich /BIN directory. Apparently a lot of non graphical stuff worked.)