… was as far as I can tell, a work of fiction. It doesn’t exist and never has.

This was surprising to me, as it seems commonly reported as fact that Tom Robbins used a Remington SL3 to write “Still Life With Woodpecker“.

Wikipedia proclaims this and even Richard Polt’s “Writers and their Typewriters” page reports it as so. However, a search for “Remington SL3”  on Google returns many quotes from the book and pleas from budding writers searching desperately in vain for this magical machine, but no actual machines.

With lines like this singing its’ praises, how could you not want one?

I sense that novel of my dreams is in the Remington SL3 — although it writes much faster than I can spell.

This baby (the Remington SL3 typewriter) speaks electric Shakespeare at the slightest provocation and will rap out a page and a half if you just look at it hard.

These lines from the book where Robbins drops into first-person and describes the writing of the story wax poetically on the virtues of the machine he’s using, and made me curious about why, as Archivist of the Typewriter Database, I had never encountered one or even seen one mentioned as being a part of anyone’s collection. I’d have thought a machine with such high literary cred would be fairly sought out and popular with collectors – maybe not Hermes 3000 or Lettera 32 level popular, but still, *someone* ought to have one.

But nobody does, and a perusal of my reference documents uncovers no mention that such a model ever existed.

So, if Robbins made up the Remington SL3, what did he actually use or what machine was he thinking of when he describes the SL3? If it truly was a Remington, then there are only a few possibilities available as a new machine in 1978-1980, when Robbins wrote the book with his new machine:

1) A Remington-branded Brother portable, most likely the electric typebar JP-2 based “Remington 611” 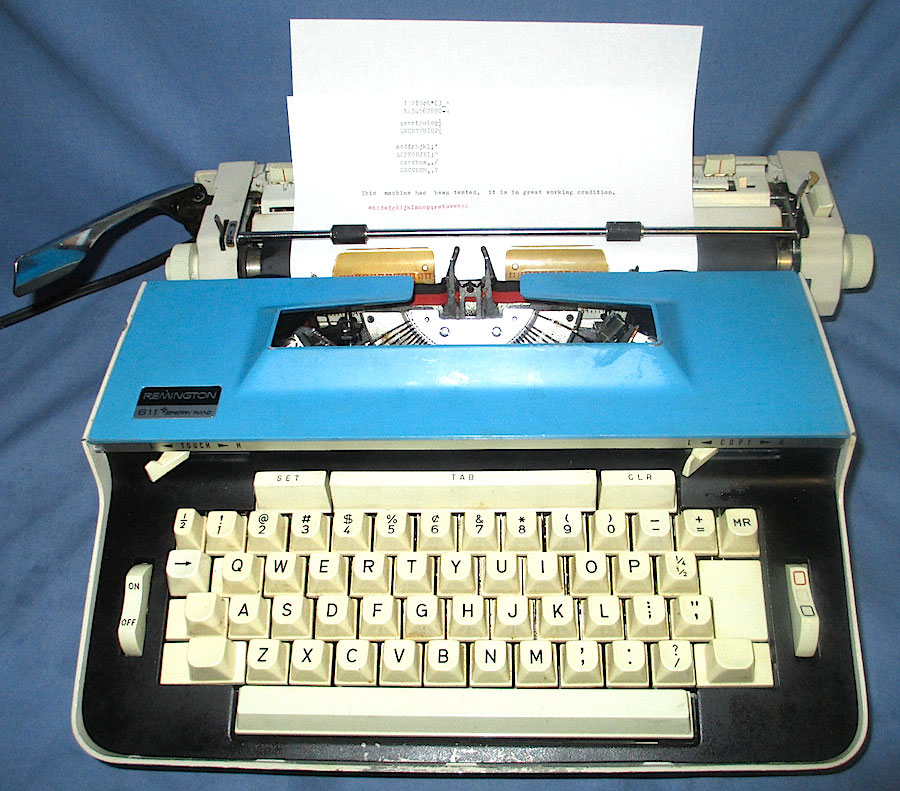 2) The Remington-Rand Electronic Model 1500, a slow daisywheel typewriter so unpopular that I can’t find a photo of it anywhere.

3) or, most likely, the much maligned Remington SR-101, a clone of the IBM Selectric II.

Remington SR-101, the final nail in the coffin of Remington-Rand

Of these possibilities, I like the SR-101 best as the model for the SL3, although only Tom Robbins can tell us for certain. However, don’t run out and get one thinking that there’s some magic in there – it’s widely rumored that IBM, having been ordered by the court to share the specs of the Selectric with Remington, sought revenge by providing inferior materials specifications to their rival, which led to the SR-101 being a problematic machine prone to breakage and easily going out of adjustment. It probably won’t be a happy experience for you.

So, if you’re a budding writer wanting to experience the magic of the Remington SL3, I’d actually suggest looking at the easily-obtained, built-like-a-tank IBM Selectric II. Happy writing! (:

Addendum: I found an interview with Tom Robbins here where he describes writing “Still Life” on his electric typewriter, and how it was an ugly grey (he repaints it) and how it basically fell apart during the process of writing the novel. Sure sounds like an SR-101 to me :D