A man of the cloth and the steel he wields
munk
From the Desk of Reverend Munk, Thrift Store Photo Gear
2 Comments 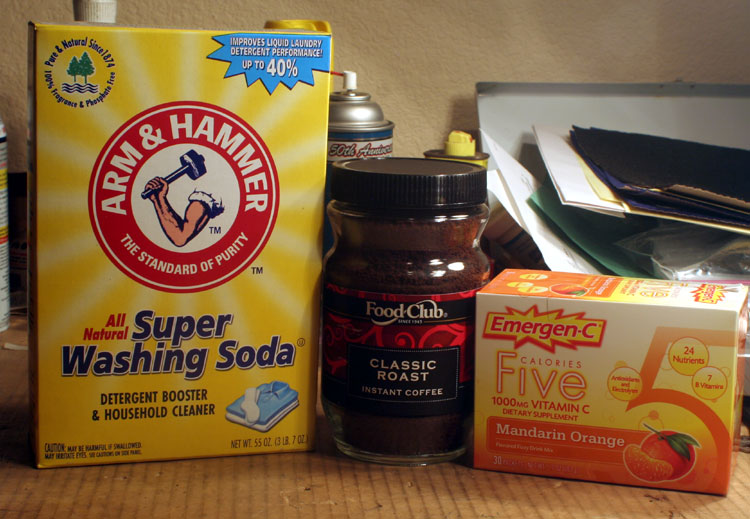 This agent has obtained the three primary ingredients of Caffenol film developer in a harrowing and dangerous trip to the corner grocery store. The Washing Soda and Coffee were easy; I picked the cheapest, nastiest instant coffee available – grand total cost for these two ingredients: $7.

The Powdered Vitamin C proved trickier. I even asked the pharmacist and he looked at me like I was crazy for asking about “powdered Ascorbic Acid” and pointed at the vitamin aisle. “It’s vitamin C”, he says. “I know – I just need it to be pure and powdered” say I. “Try ‘Emergen-C’.” he replies. Well… if that what I can get, I guess. I chose the “low calorie” version in an attempt to limit how much sugar (fructose) is in my developer. “Emergen-C” is way more expensive than I think a bottle of pure powdered Vitamin C would be, so $10 is a bit steep for that particular ingredient. You can probably do better, but I’ll try it and see how it works out.

Thanks to an Amazon gift card sent by my Mother-in-law for Christmas, I was able to order some equipment, including a 2-reel Paterson daylight developing tank, which should get here sometime between Jan 6 and Jan 22 (?!?), and a bag of powdered Fixer – the only actual photo chemical compound you need for this process. Some reports state you can use salt water as a fixer, I may try that eventually, but most reports recommend standard fixer, so that’s what I’ll try first – at least so if it goes sideways, I can blame the Emergen-C.

So, still gotta source some measuring cups and other glassware for mixing and storing my solutions. Sounds like I only need to store the Fixer, as the Caffenol solution is best mixed and used fresh and then flushed. It goes inert within a couple days, even if sealed in a bottle. My impromptu darkroom will (as is usual in these missions) be the un-used second bathroom. Windowless and with a handy shower to hang-dry my negs in, all I should need is a towel to seal the crack at the bottom.

Despite the attractive prices on local Craigslist, I will not be getting an enlarger. (repeat again: “I WILL NOT GET AN ENLARGER”)