A man of the cloth and the steel he wields
munk
From the Desk of Reverend Munk, Typewriter Typestyles/Fonts, Typography
11 Comments

While working on the “Typewriter Typefaces Bible” project, I’ve collected over 50 typeface references together spanning from 1915 through 1993. This is probably still just a thin sample of what was produced over those years, but it is still extremely useful in figuring out what typefaces were available during what years and on what machines. “Vertical Script” is a face that I’ve always been curious about, having seen it rarely on Underwoods and Smith-Coronas of the 40’s and 50’s. As the years passed since I first was intrigued by the face, I’ve seen reports and examples of the Vertical Script typeface on old Hammonds and 1960’s Olivettis as well. With my 50+ typeface references collected, I figured tonight would be a good time to try to trace the history of Vertical Script and figure out what makes and years of typewriters it’s likeliest to be found on.

We first see “Vertical Script” in a 1915 Hammond typeshuttles catalog, where it is listed as Shuttle #70. There are some characters different from later incarnations (curly quotes and such, which would be unique to the Hammond), but as far as the letterforms go, it’s identical to the sample we find in the 1928 Ransmayer-Rodrian catalog listed as “46 Ra Script Type”. Ransmayer lists this face as 1/10″ rather than in metric, suggesting that it was sold to U.S. market manufacturers and dealers.

While Smith-Corona did adopt the 46 Ra typeface, it doesn’t appear in a 1931 Typeface Catalog for the 4-Bank Portable (Corona 4). Underwood appears to beat Smith-Corona by offering “Vertical Script” in a 1948 Typeface Catalog. Smith Corona is offering the typeface as “Script No. 46”, 10 Pitch by 1954. 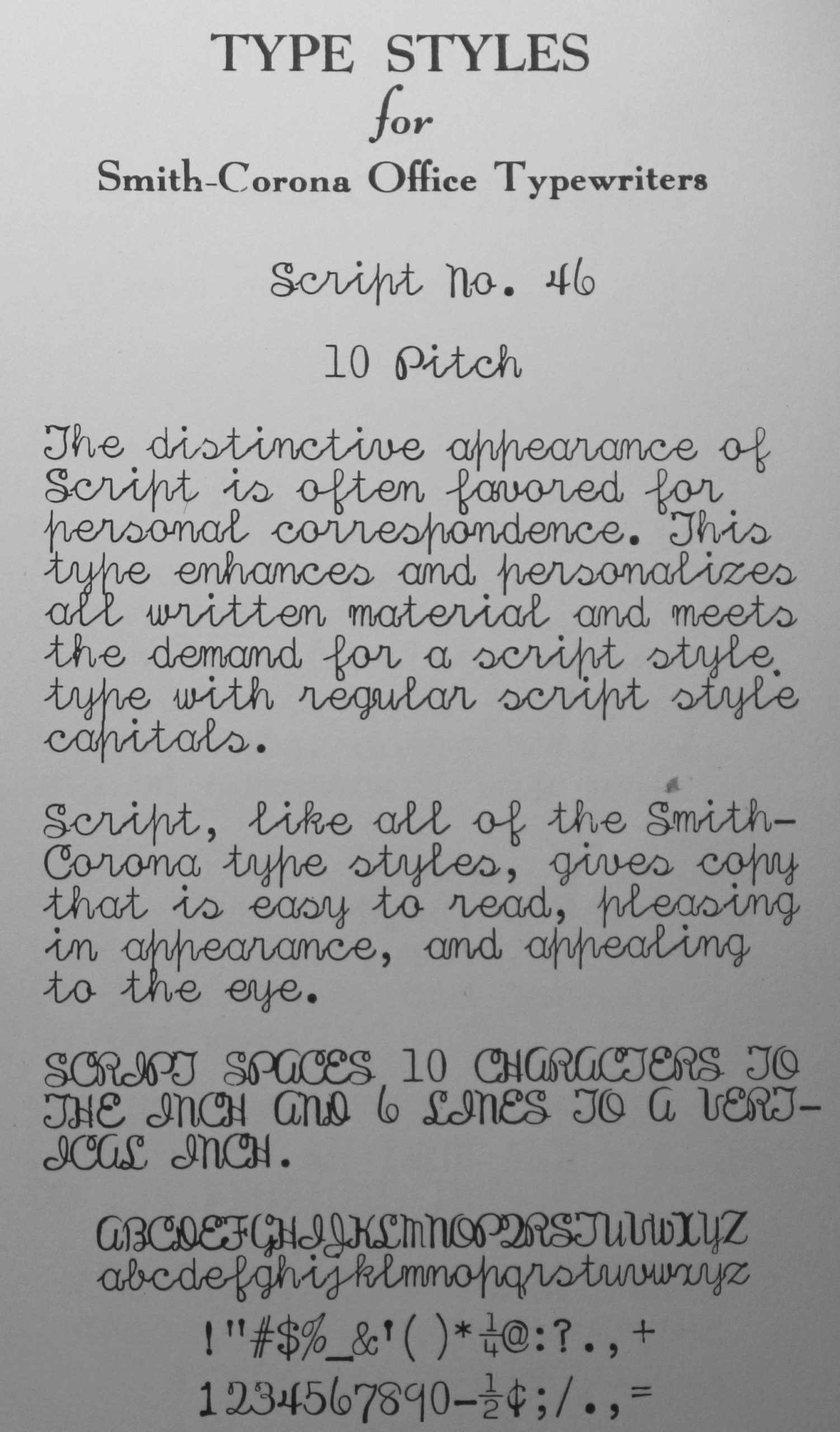 1956, 1957, 1964 NOMDA all contain listing for the typeface, offered by Underwood as “Vertical Script” and by Smith-Corona as “Script No. 46” and as “Medium Roman Script No. 32” with Medium Roman capitals and Script No. 46 lowercase letters, for *some* reason, I’m sure.

Oddly, SCM again lists Script No. 46 and No. 32 in the 1975 NOMDA edition, and Underwood lists Vertical Script as well, but it probably is just a case of NOMDA running an old typeface list, as the update dates are blank on these pages. The 1980 RaRo Type Catalog does not list 46 Ra. From the evidence collected, one might be able to say that the best chances to find a machine with Vertical Script on it is to look at Underwoods of the 40’s, 50’s and 60’s, Smith Coronas of the 50’s and 60’s, Olivettis of the 60’s & 70’s and among your old Hammond type shuttles. Of course, Ransmayer-Rodrian offered the typeface generally to manufacturers and dealers from at least 1928 through probably at least 1967, and any independent typewriter repair shop or dealer would have been able to specialty order the face and re-type nearly any machine that the slugs would fit on, so it probably wouldn’t be impossible to find the face on a Royal or other machine, but it would be very rare. Also, one should consider that the face was only ever offered in Imperial 10-Pitch, so it would be unusual to find it on a metric-based European machine, I would imagine.

It’s also interesting to note how different manufacturers gave the same face (possibly all from the same RaRo foundry) different names, but sometimes kept the Ransmayer catalog number attached to that name. I feel like I will probably do posts on other Script typefaces, just to get the naming a bit clearer and maybe encourage collectors to use the proper names for script faces rather than calling them all “script” or “cursive”. There is a certain specificity level that can be reached, and I’ll be doing my part to help you reach it. (:

Regarding the typeslug markings, I have no examples to examine, but I suspect that if you do have a machine with Vertical Script on it, the typeslug markings would be “46” or the Ransmayer “R in a stop sign” mark plus “46”. Please comment if you find this to be the case (or not the case) on your example.