There’s been some uncertainty about what typewriters were used in the movie “Naked Lunch” by David Cronenberg. I’ve remembered them as a Smith-Corona Super-5 body from the 50’s (Bill Lee’s Clark Nova), a 60’s Olivetti Lettera 22 (Tom Frost’s Martinelli) and an Oliver (Tom Frost’s Mujahideen arabic machine). Recently I got into a conversation over the Clark Nova with the friendly local typewriter repairman, and he said that he thought that the Clark Nova was a Voss. I couldn’t for certain deny it because it’s been a couple of years since I last saw the film, and I wasn’t paying close attention to the machines back then.

So, to answer the question once and for all, I did some screenshots of the 3 primary machines from the film, since a Google image search turned up nothing. 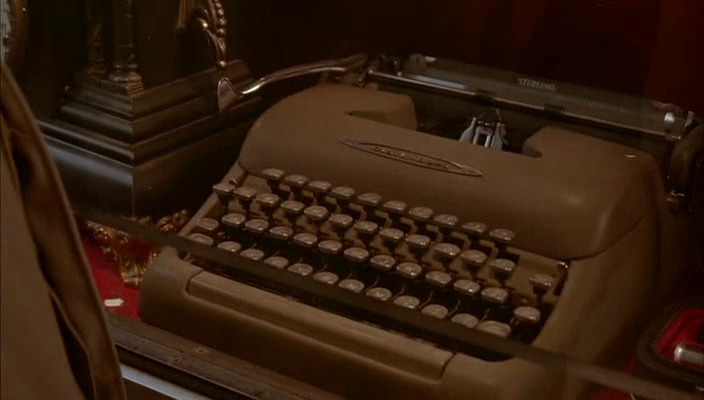 Well, there’s the first glimpse we get of the Clark Nova in the pawn shop window, and clearly it’s a late 50’s Smith Corona Sterling (no “racing stripes” and you can just make out the “STERLING” on the backplate). The keys are funky, though. Not at all like the keytops that are supposed to be on a Sterling of this vintage. Let’s take a closer look… 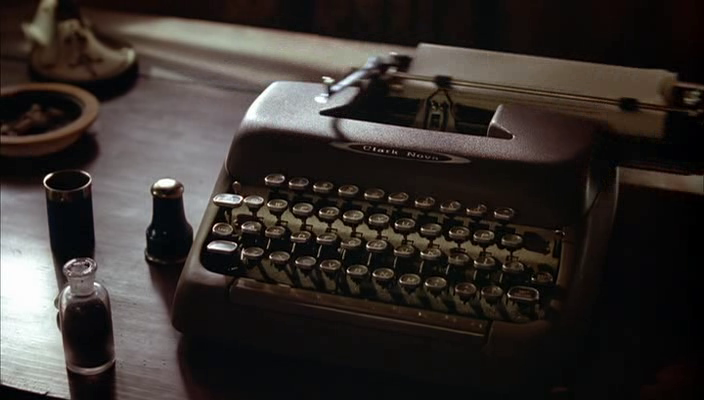 A later shot of Clark Nova, with clearer lighting…

Ahh, there we go, now we can see that the keytops are actually the glass-top tombstone keys from a mid-40’s Royal. Maybe an Arrow or a QDL. Cronenberg must have put a little more money into this prop than he did with the others, because it seems he’s cut the keys off of both the Sterling and a Royal and attached the Royal keys to his prop machine. Ooh, boy – doesn’t that chrome “Clark Nova” badge gleam?

And now, Clark Nova from the top: 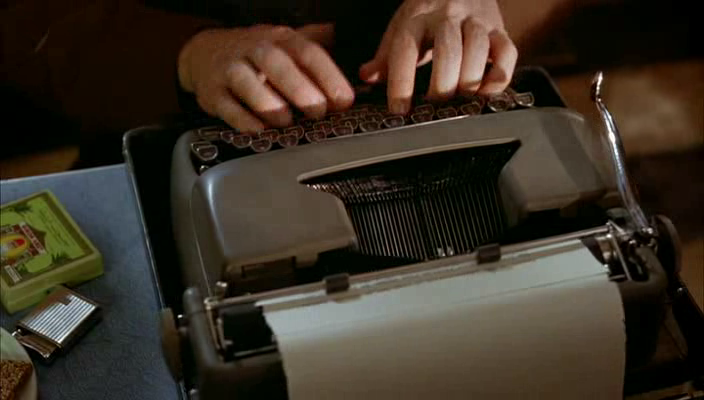 The tombstone keys can be more clearly seen here… 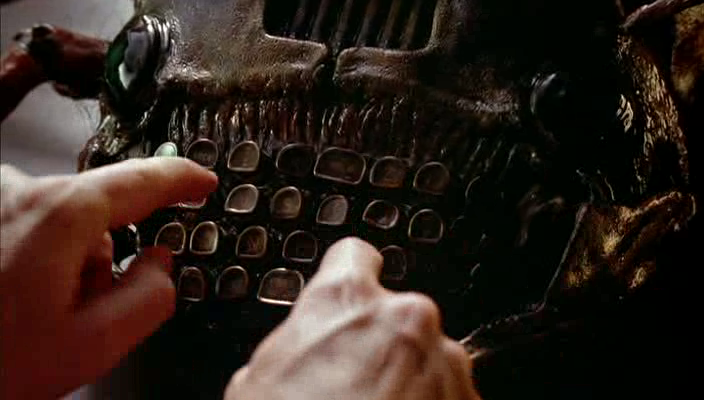 Sadly, yet more late-40’s Royals had to be keychopped to make the Clark Nova bug props.

So, how about Tom Frost’s machines? What typewriters gave their lives in service to make the screen adaptation of William S. Burroughs’ “unfilmable” novel? When first we meet Tom Frost, he’s cradling a familiar-looking case: 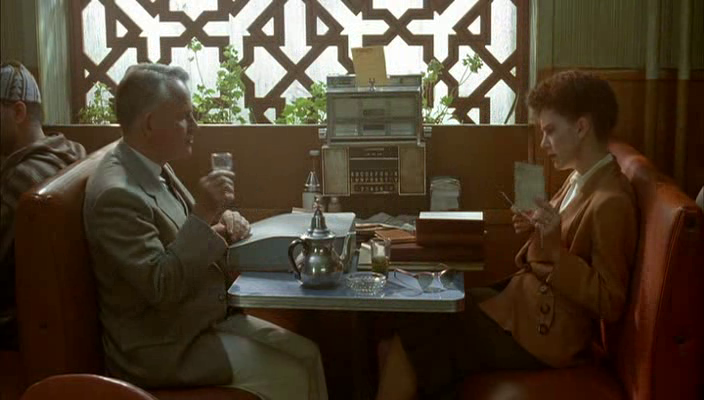 The first appearance of the Martinelli, in a case lacking the characteristic “Lettera 32” style stripe. 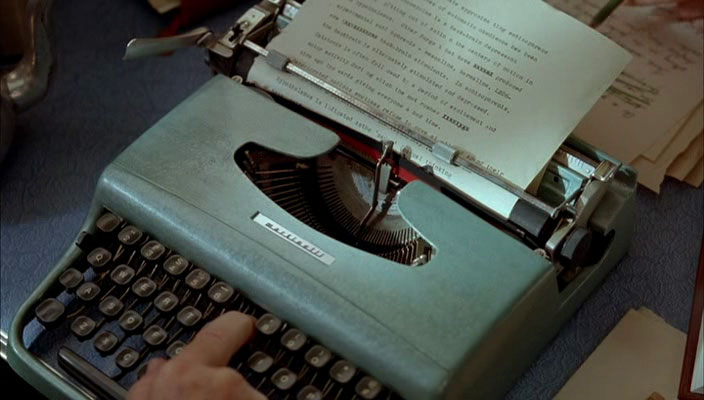 A clearer shot of the “Martinelli” badge 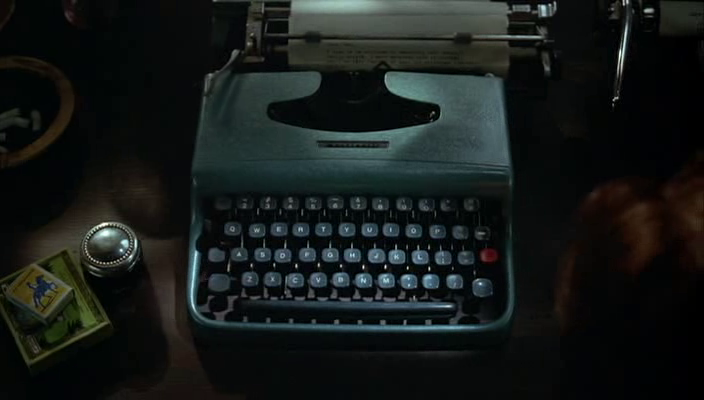 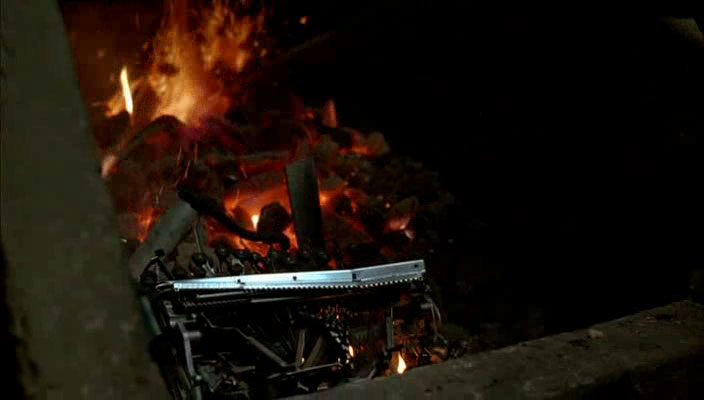 and out of the coals comes The MugWriter: 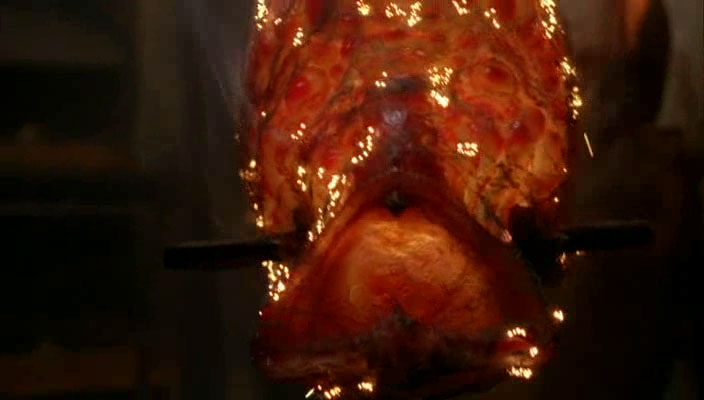 Later, it becomes apparent that MugWriter is an illusion, because Martinelli appears again. The hot coals treatment seems to have worked, after a fashion: 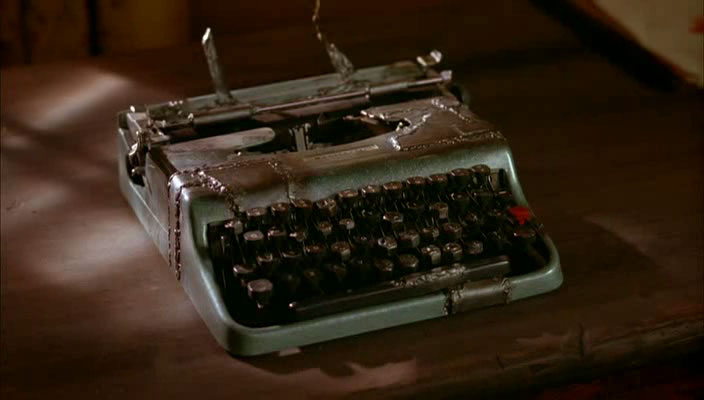 This Lettera 22 (note cute “rabbit ear” paper holders) after a trip to an inexperienced typewriter repairman.

That actually looks more like an Olivetti Lettera 22 to me, rather than a 32, so I got one wrong. It looks like the only changes made to this machine were the replacement of the badge with one that says “Martinelli”. Possibly at least 2 were destroyed for this film. How about Tom Frost’s other machine? How did that one fare? 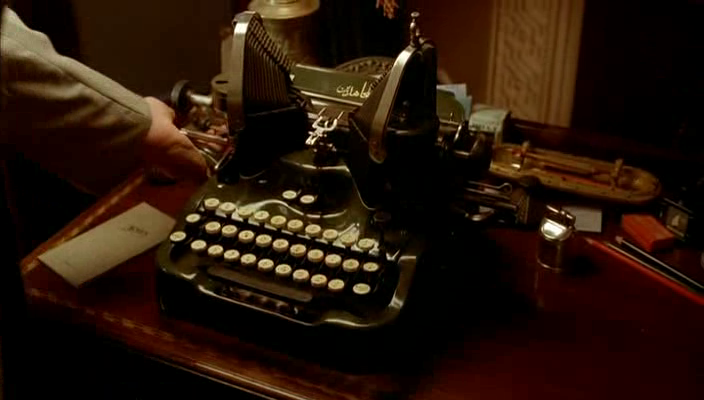 The Mujahideen looks like it’s probably an Arabic-language Oliver (No. 9 maybe?). I can’t tell if there were any changes made to the machine for prop use in the film.  When we see Bill Lee and Joan Frost typing on it, it does print Arabic letters and types right to left. 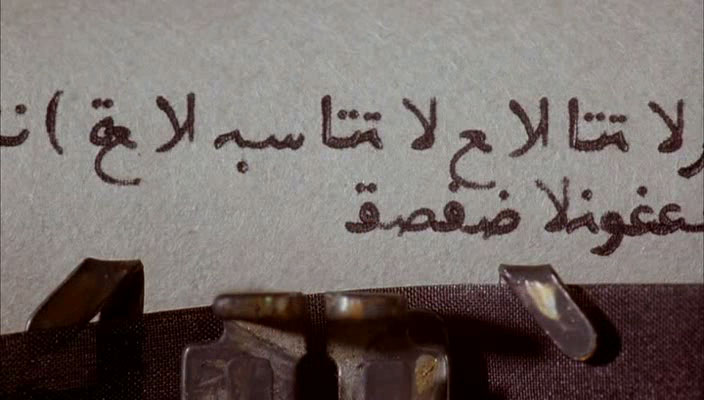 Sadly, the Mujahideen gets a little too rambunctious, and it ends up “jumping” out of the window onto the street below: 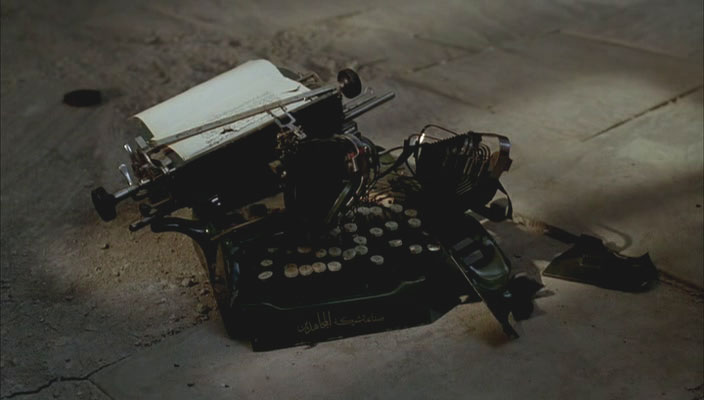 In the end, even Clark Nova gets it. It seems that Tom Frost is no better at taking care of typewriters loaned to him than Bill Lee is. 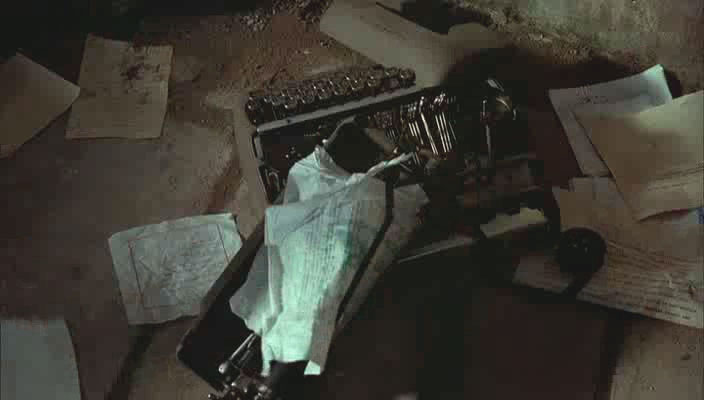 …and finally, scratch one Sterling with Royal keys.

There are other typewriters in Naked Lunch, primarily in the first Interzone Cafe scene. Let’s see how good you guys are at identifying them. Please state your guesses in the comments and we’ll see who’s really good. :D 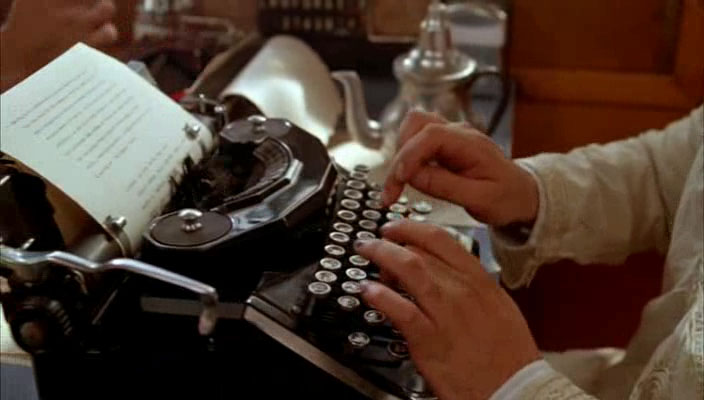 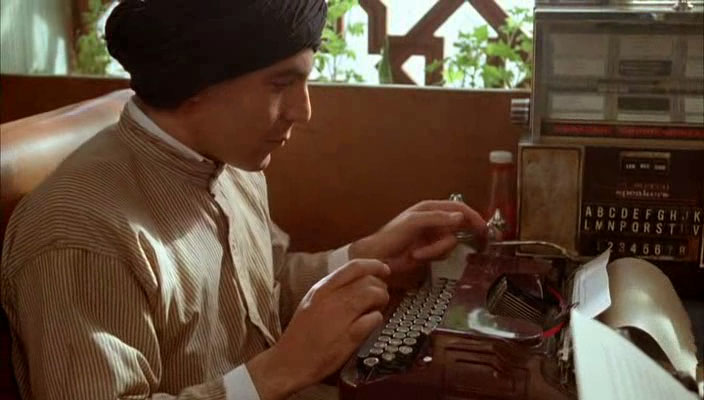 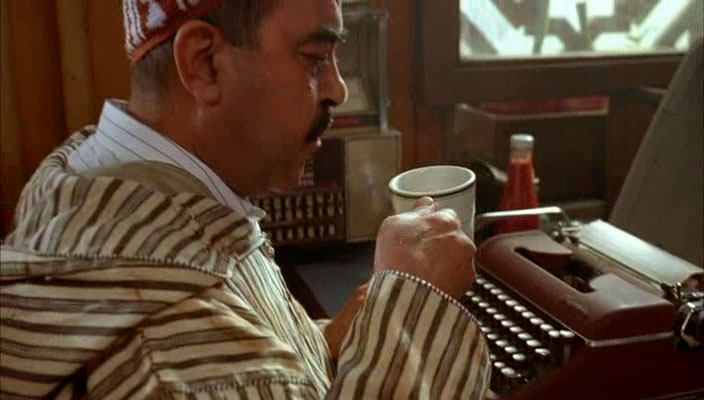 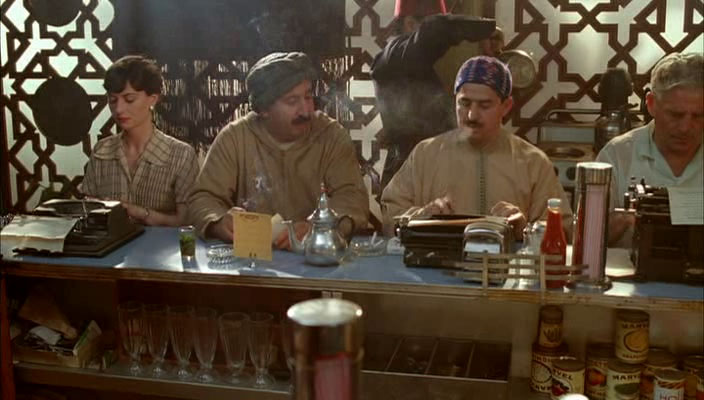 So there you have it, the Typewriters of Naked Lunch, exposed!