A man of the cloth and the steel he wields
munk
From the Desk of Reverend Munk, The Typewriter Database
7 Comments

I’ve updated the Dayton page at the Typewriter Database now that Typospherian Mark Adams has found the *seventh* known surviving Dayton and uploaded a gallery for it to the database. I’ve added links to all of the current information we have:

Robert Messenger’s “Day of the Dayton, Typewriter of the Damned (Ohio City)”

These three very well researched articles pretty much sum up everything currently known about the Dayton, and it turns out to be quite a lot relative to other very obscure typewriters. The Dayton seems to be generating more interest in the collecting community – really as it should. It is a typewriter that is:

1) vanishingly rare. There are only seven Nine known to survive.

2) despite its rarity, it’s not worth much. Collectors who’ve mentioned value tend to place it very low. Update: they’re getting a bit pricier now that collectors are seeking them out. I’ve seen at least one go for over a grand – that’s still somewhat unusual, but it’s likely to get more usual.

3) the possibility of new examples being found is high. The Dayton is not a highly desired machine (yet), but it’s not likely that the ones that were made ventured too far from Dayton, OH. The potential search area is fairly limited.

4) it’s actually a pretty well-made machine, despite its economical design. Chances that more have survived undiscovered is good.

These factors seem to me to make it a good candidate for a collector on a budget as a “Holy Grail” machine to look out for, or even actively search for – if they are looking to have a “I have one of the only X known Daytons” sort of machine in their collection, where “X” is likely to stay a single-digit number for awhile.

To sum up the whereabouts and identities of the known surviving Daytons is easy. There are so few that the list is short:

These numbers tell us that there were at least 372 Daytons built and sold, and that the serial number prefix might indicate the color of the machine, as Bill Wahl’s BN one is one of the only known black crinkle paint versions to survive. The AX versions are all “Battleship Grey” usually with blue pinstriping. The Milwaukee Museum examples look black in the museums photos, but I suspect that’s an artifact of the high-contrast B&W photos as they are clearly flat-painted and have the pinstriping.

I revisited #BN330 yesterday down at Bill Wahl’s shop to take better pictures and find out a little more about the machine. I immediately discovered on closer examination that I had the serial number wrong before (It’s not BX530 as I previously reported – it’s BN330), and while the machine is semi-restorable, it’s actually missing an important part of the ratchet mechanism that advances the platen. The platen roller spins freely and doesn’t ratchet. Otherwise, it’s in rough but typeable shape. Here are some better pictures. 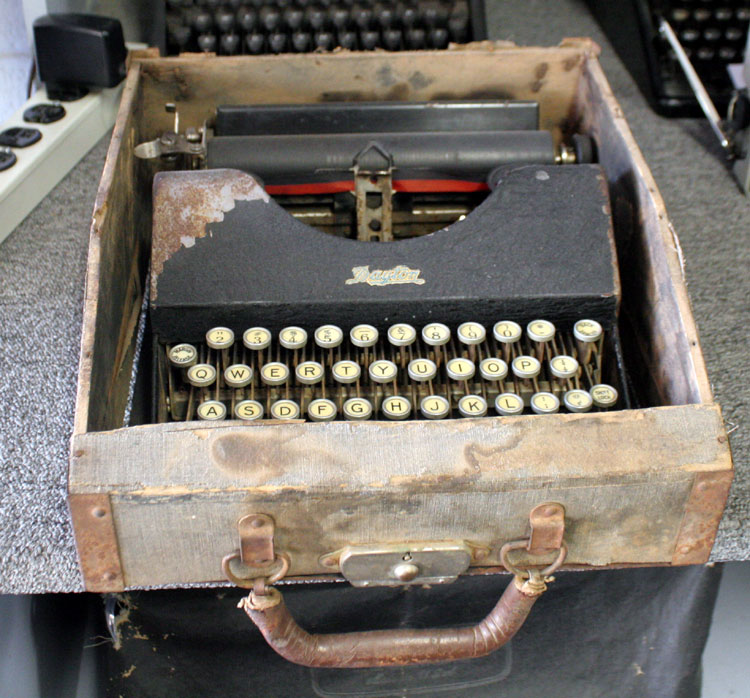 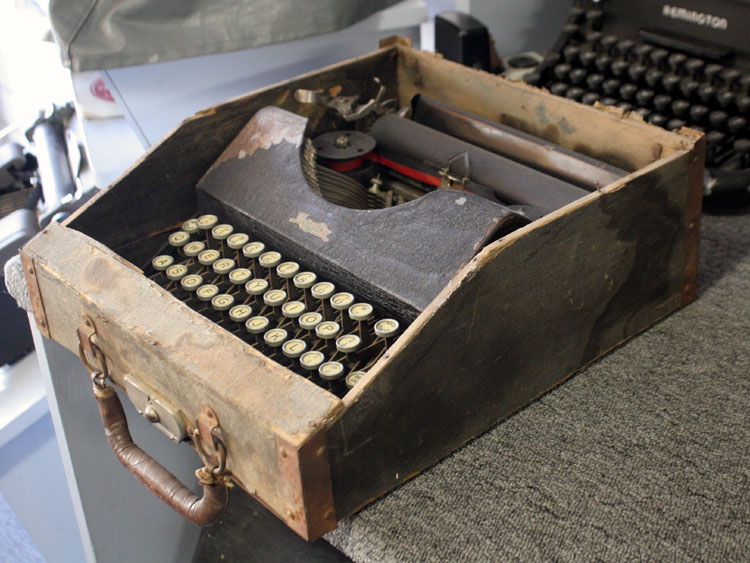 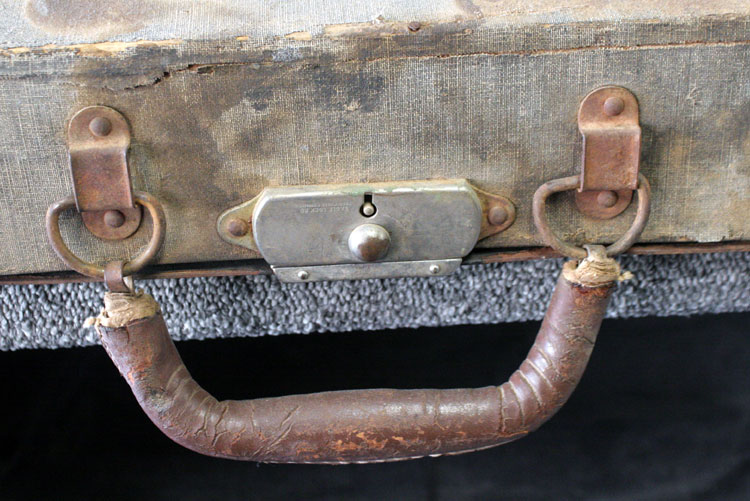 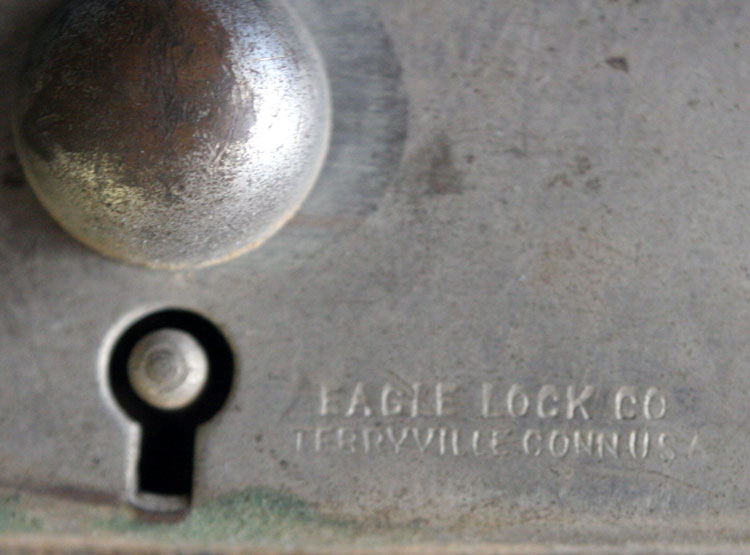 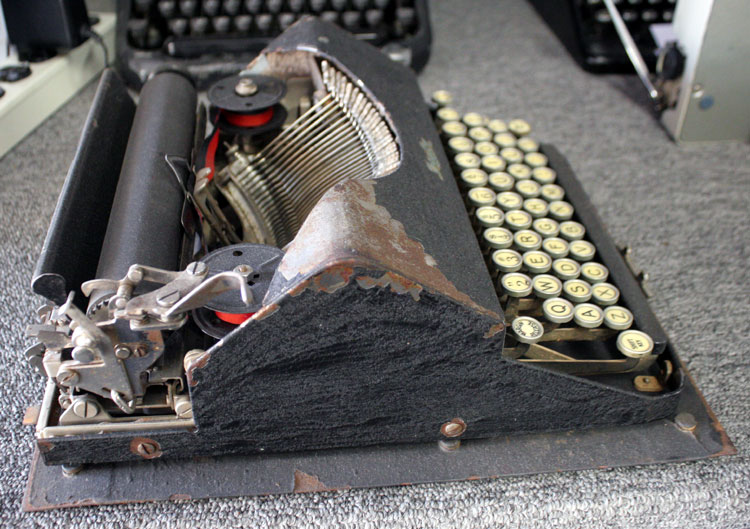 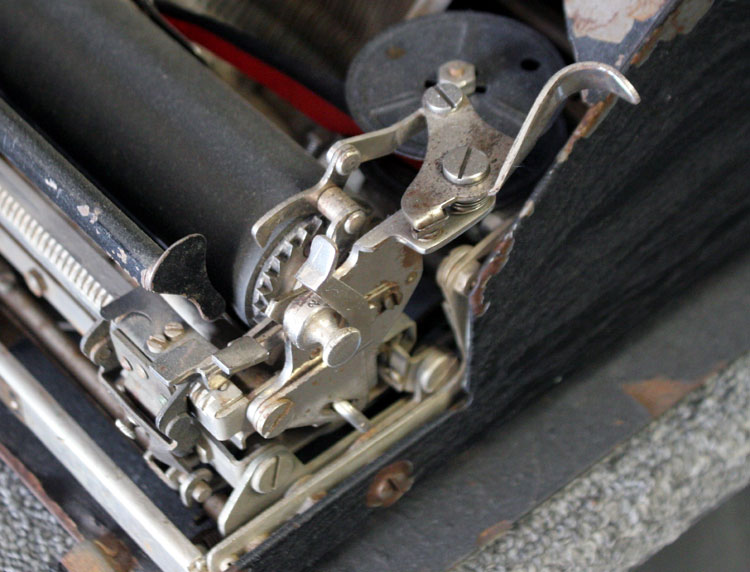 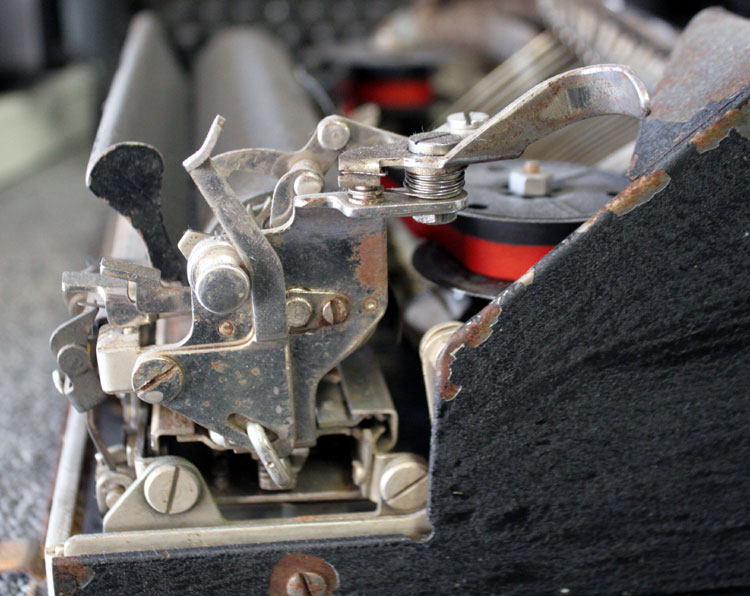 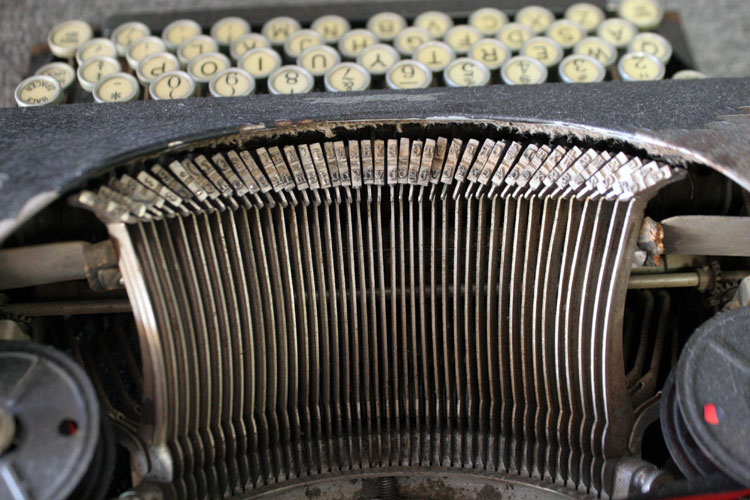 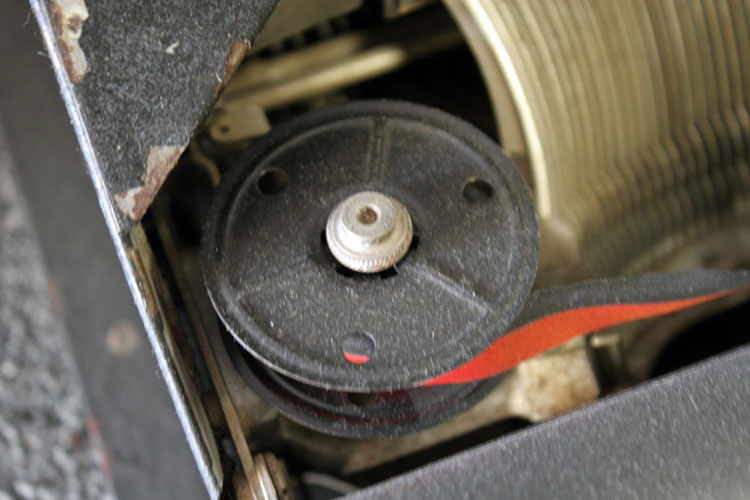 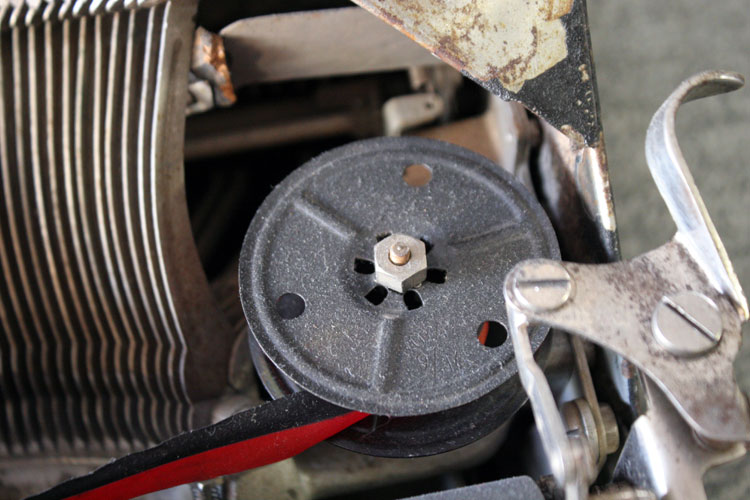 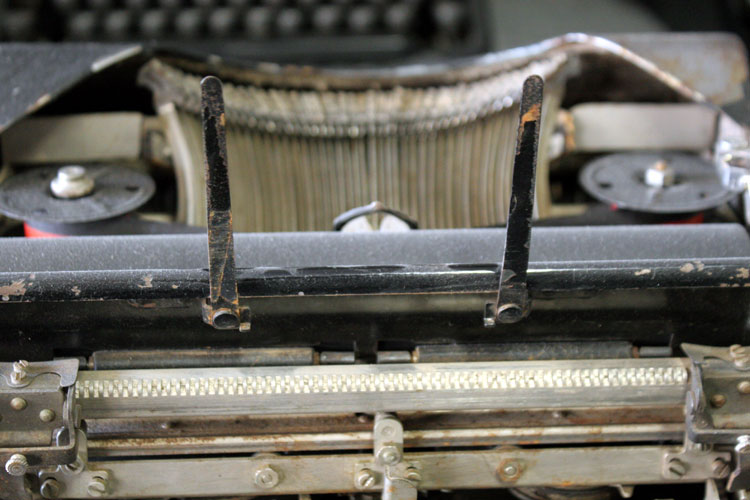 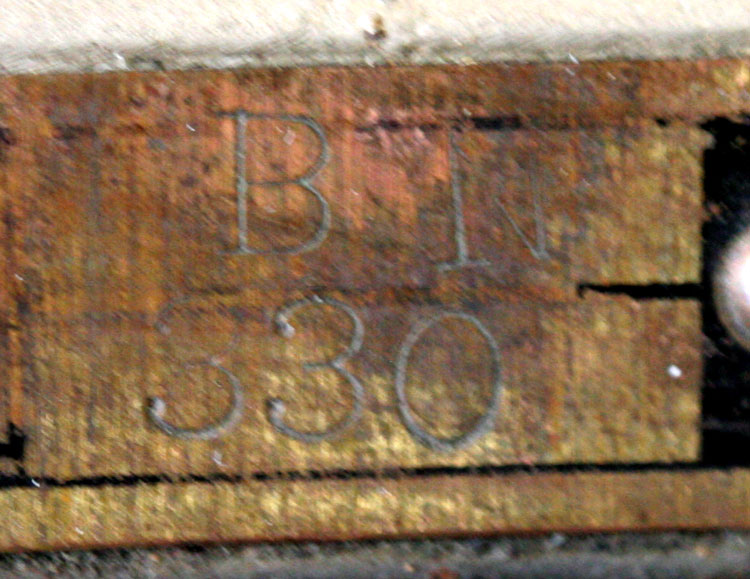 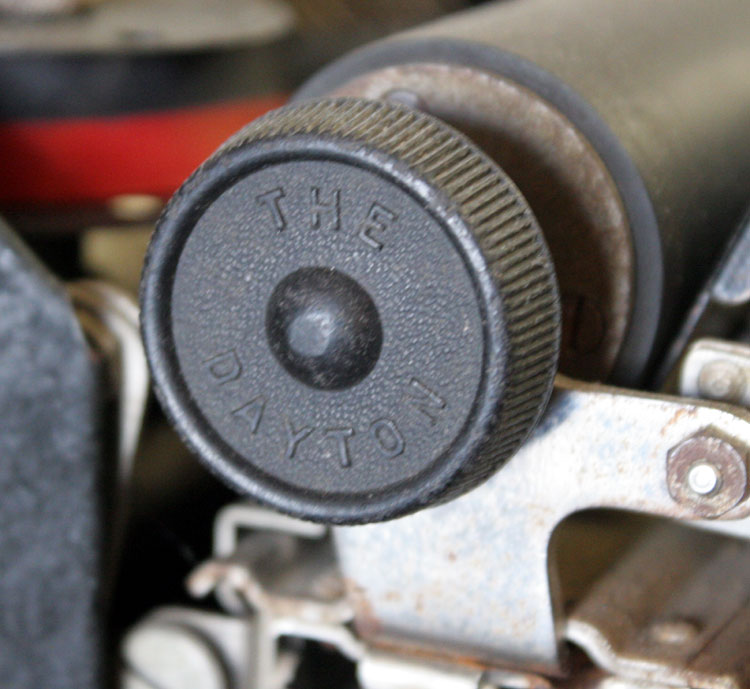 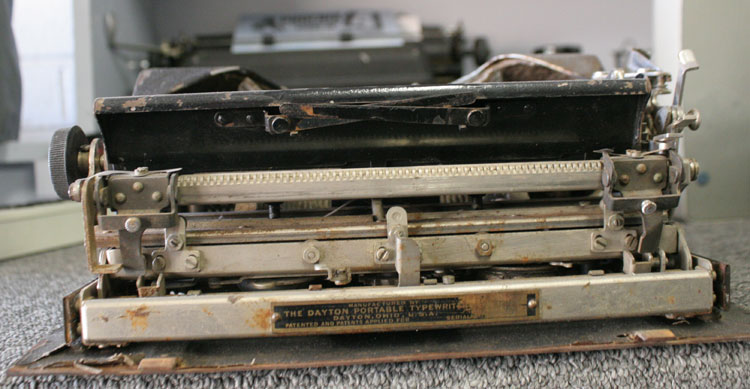 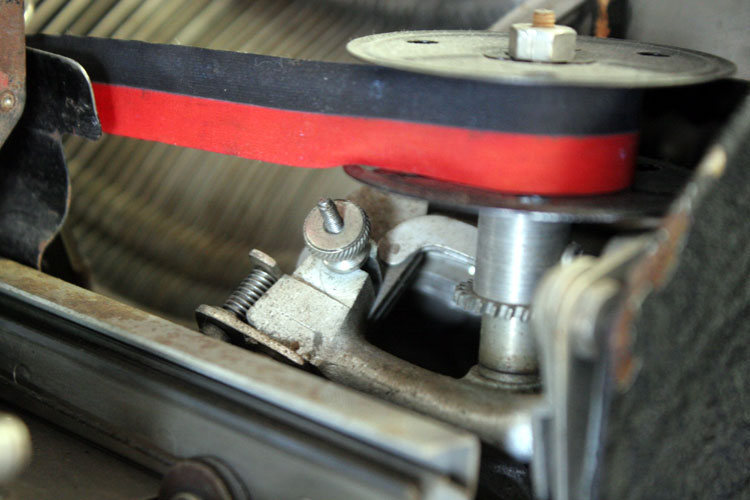 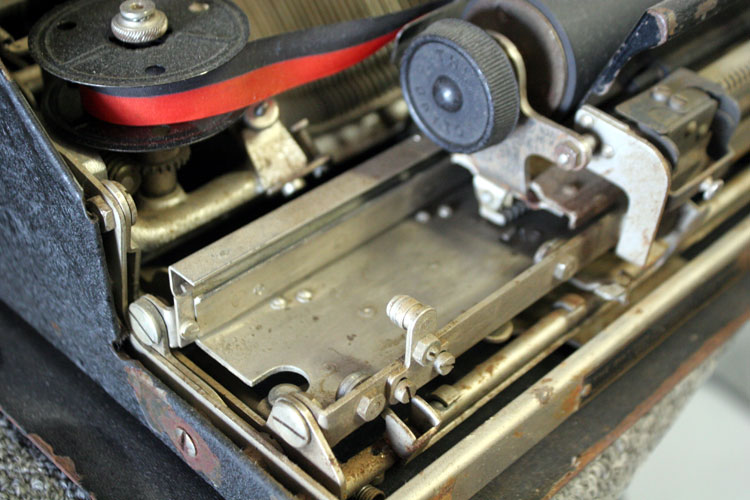 I also learned that Bill’s #BN330 came into the shop via a fellow who found it in a locked storage unit in Phoenix that he had bought the contents of at auction. Neither the seller or Bill had any idea of the rarity, so I’d guess the selling price was miniscule, and based pretty much entirely on the machine’s condition. #BN330 may be the farthest travelled Dayton, since Phoenix is quite a ways from Dayton, OH.

So, how about it – who’s going to be the collector that turns up confirmed Dayton #10? It’s up for grabs to the collector who searches hard enough, and probably won’t cost much. If you do find a new one, tell us all about it! Become one of the Few, the Proud, the Dayton Owner’s Club. :D