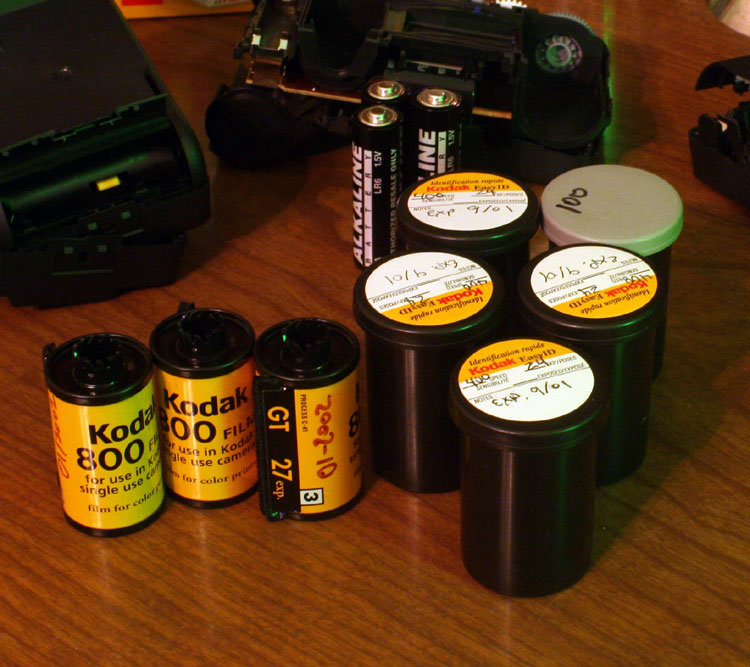 Wedding yesterday between some good friends of mine, and in addition to my duties as a man of the cloth, I also brought along my cameras so I could serve as backup photographer when I wasn’t up on the stage. I brought multiples so that I could effect several different kinds of photography: straight DSLR (which I installed on one of the wedding party guests), 7 or 8 Kodak FunSaver 35’s (installed one to a table among the guests, for them to take pictures with), the Sony F707 (which booted up with “NO MEMORY STICK” errors all day no matter what stick I put in it), and my Nikon FG 35mm and 6 rolls of film. 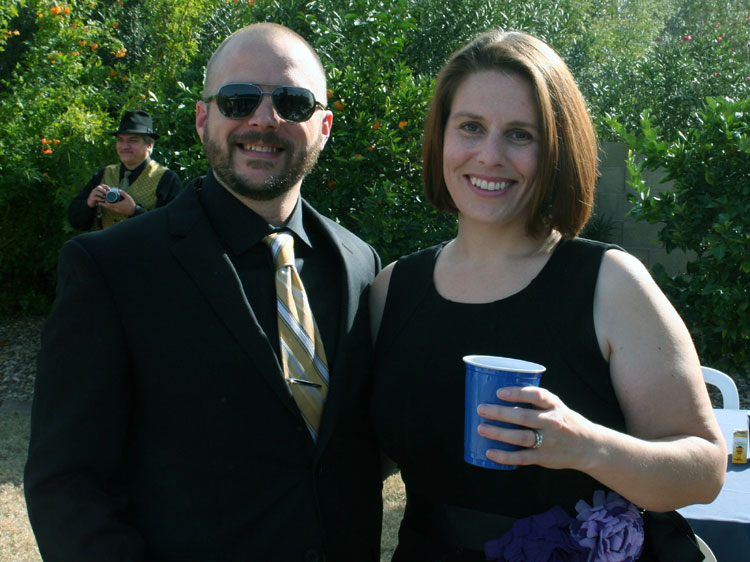 There’s me in the background with the Nikon. This marks the start of both the Digital and the Film pictures. Keep in mind, of the 2 digital cameras I’d brought, one was already down for the count with a mysterious boot error. 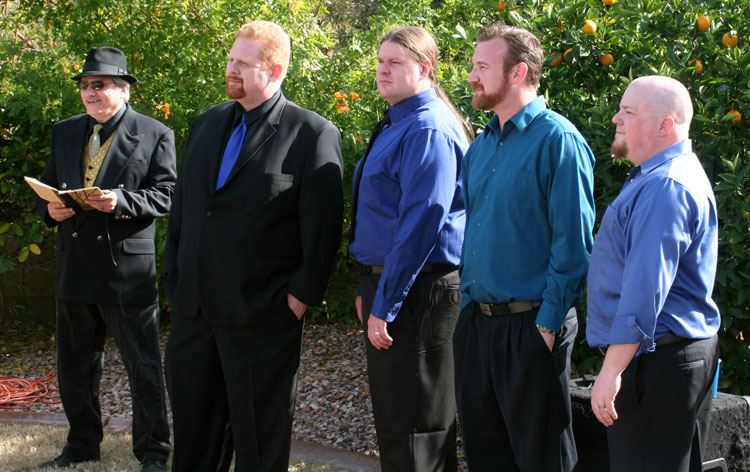 The Groomsmen, the Groom, and me – your humble officiant. 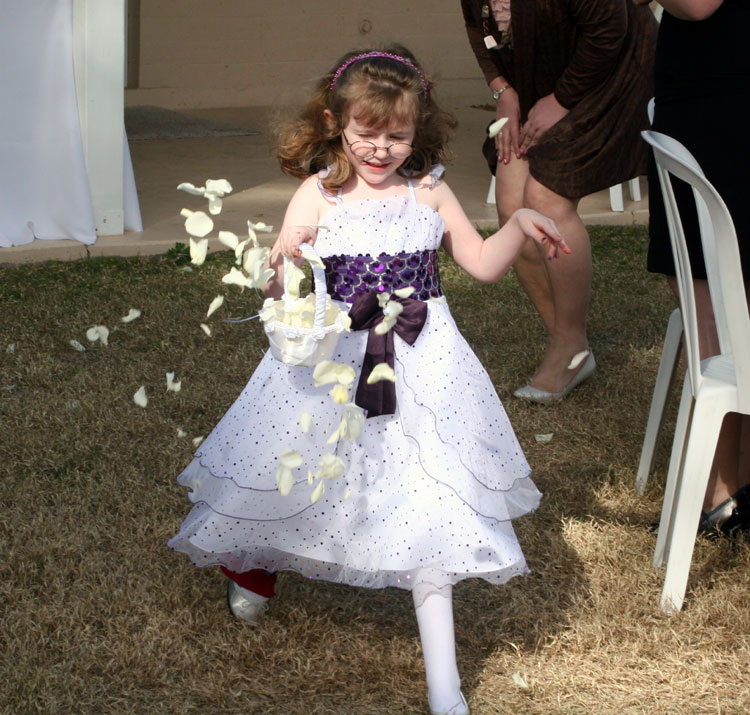 Exhuberant flowergirl starts the bride’s train, and we get just this far before the battery in the Canon 20D DSLR goes dead. No idea why, as I’d just charged it this morning, and these batteries have performed for a week or more on a charge before. Thus, no more digital pics. After the ceremony, I continued shooting 35mm with the Nikon the rest of the day, and it performed flawlessly. I came back with 9 or 10 rolls of film exposed, which will have to wait until I perfect my Caffenol processing method before I’ll risk developing these. 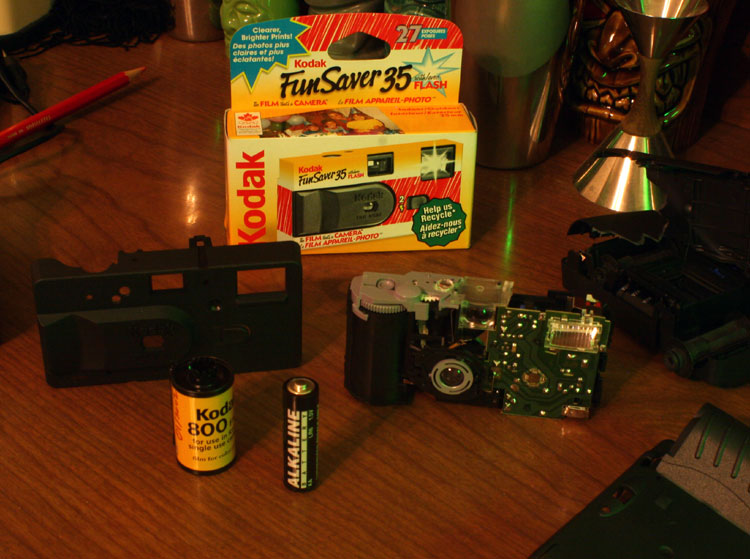 In case you’ve ever wondered what’s inside a Kodak FunSaver 35. Watch out when you disassemble these: you can take out the battery and discharge the flash repeatedly, and *still* the thing will give you a nasty zap if you touch it in the wrong place while it’s apart. owch! 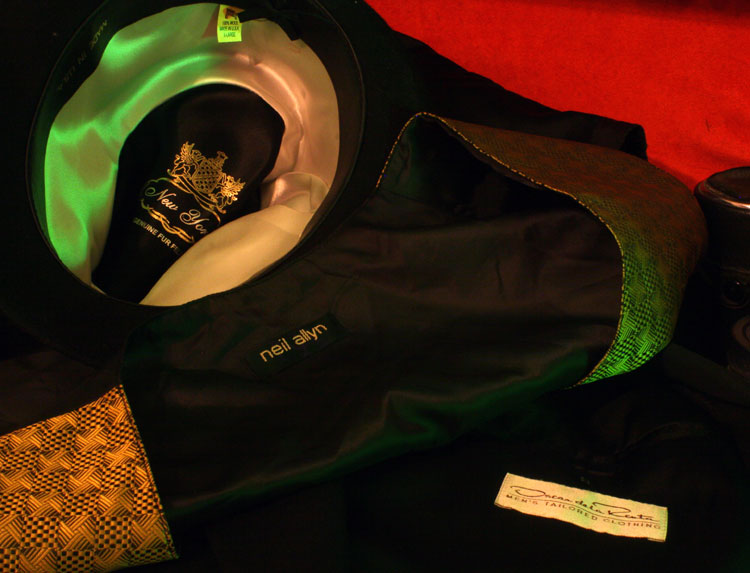 The Reverend Munk is sporting A wool felt Fedora by New York, a gold embroidered waistcoat by Neil Allyn, and a double-breasted black wool jacket by Oscar de la Renta.