A man of the cloth and the steel he wields
munk
From the Desk of Reverend Munk, The Typewriter Database
6 Comments 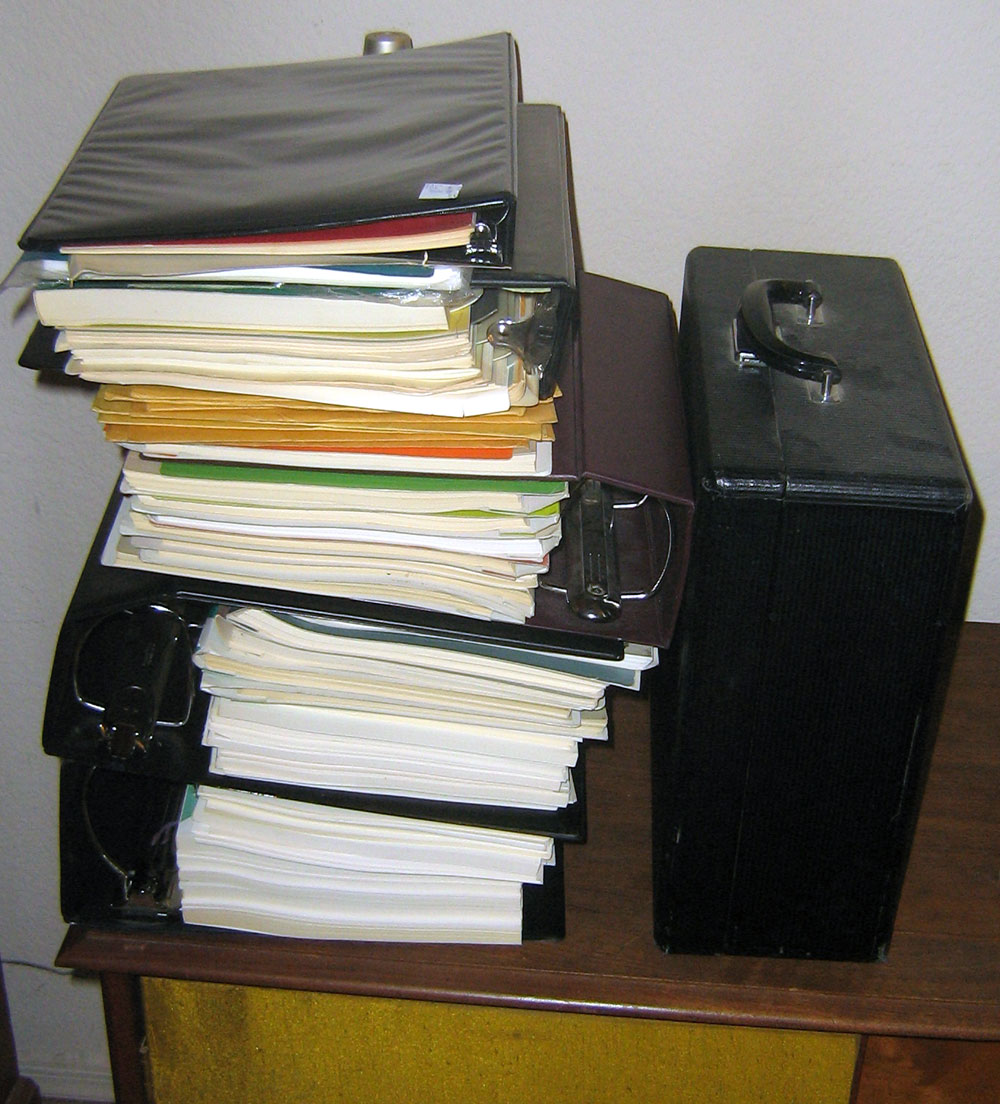 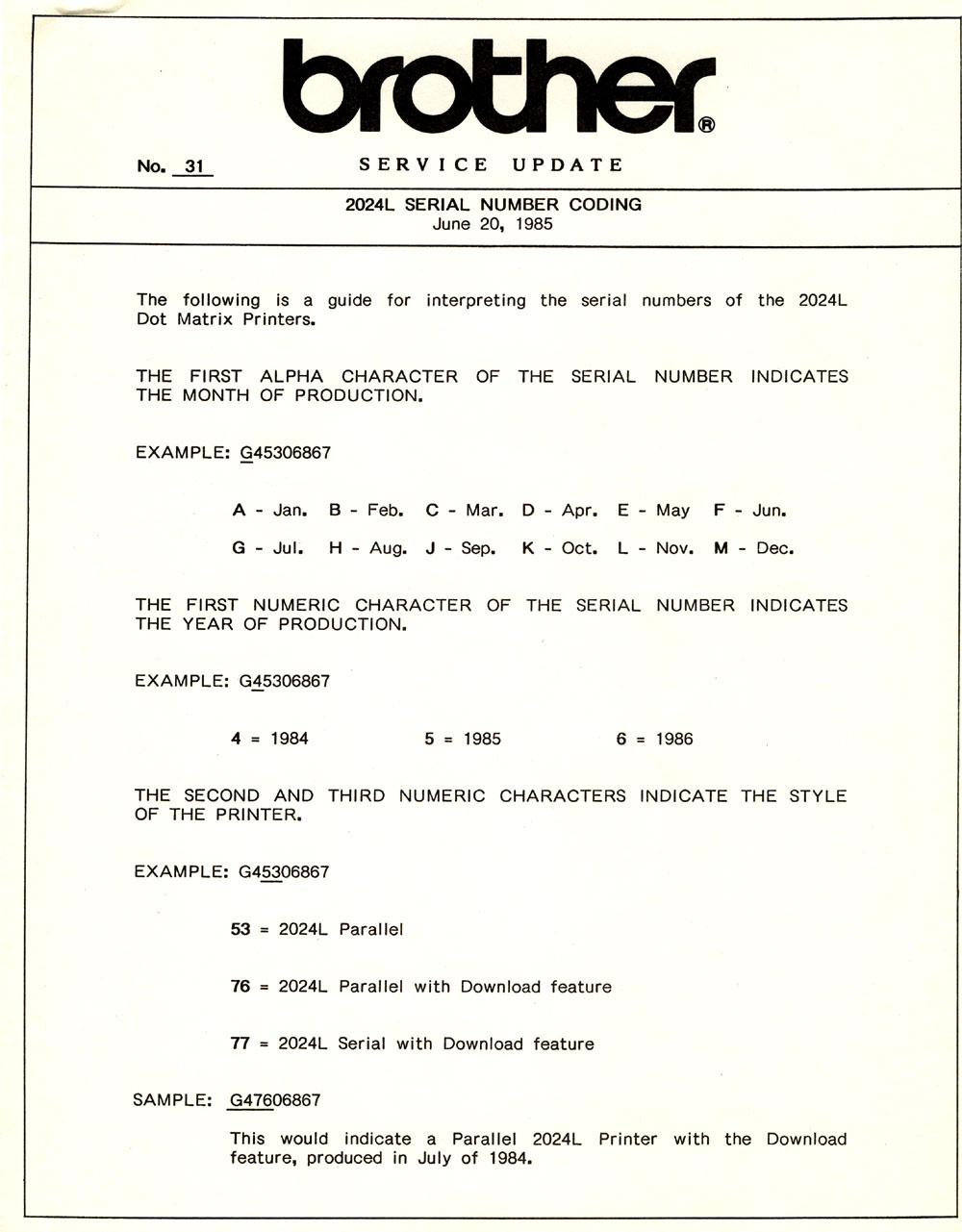 So, I paged through the bulk of the Brother documentation, and it looks like I have pretty good coverage of Brother models between the late 70’s to the early 90’s, very heavy on the 80’s. Good news for Brother Electric appreciators. This documentation extends up to the WP series word processor line and at least one Brother dot-matrix printer.

Speaking of the printer, the above Service Update was the only page in the whole stack where Brother officially explains their serial number scheme. It describes how to decipher the serial number of a model 2024L Dot Matrix printer, so at first glance it seems irrelevant to typewriters… except…

Yeah, it looks like a match for the scheme they used all the way back since the 1960’s for their manual JP-1 models. Well, that suggests that Brother probably always serial numbers machines this way, and that it can be assumed that daisywheel wedge serial numbers can also be deciphered using the above formula. 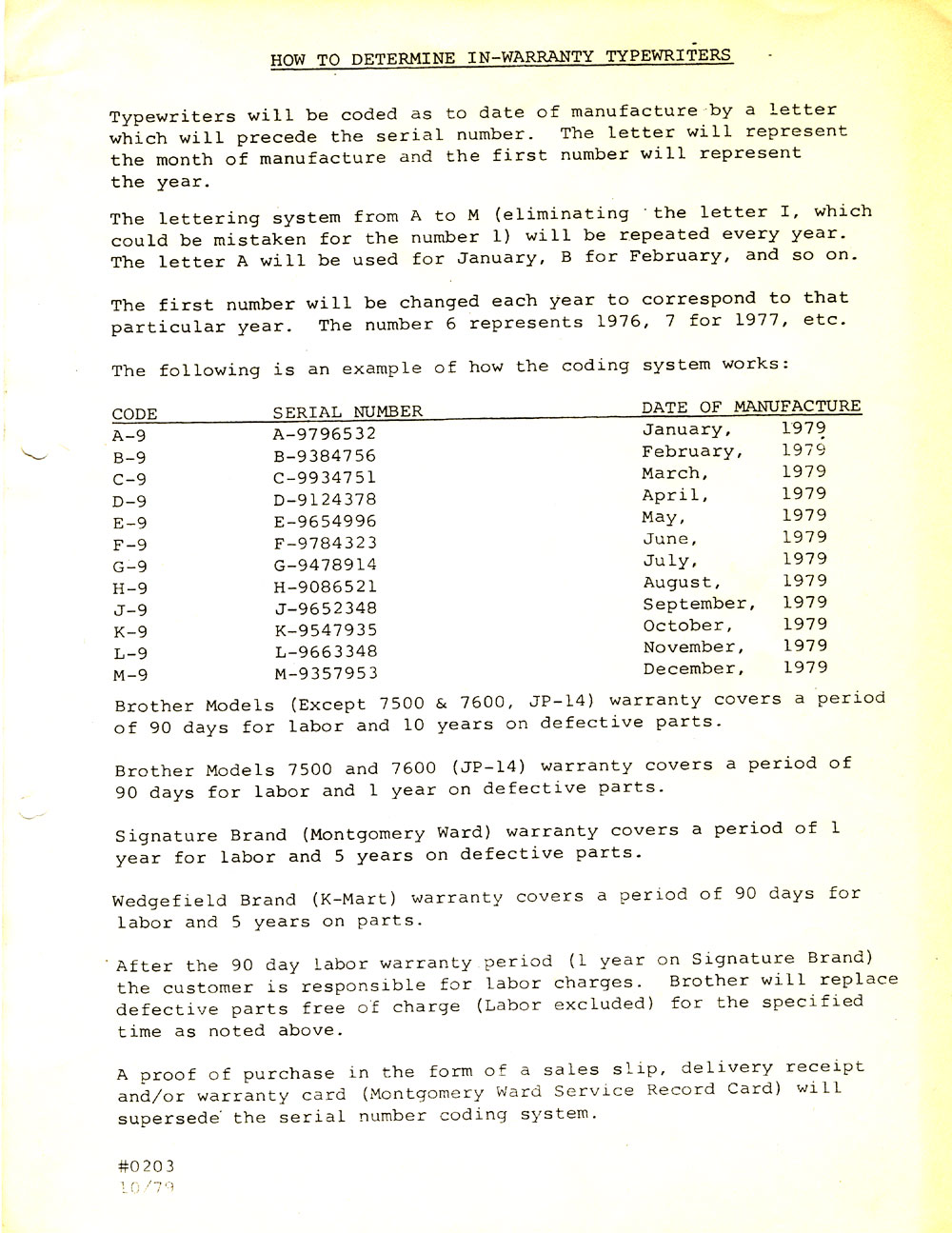 Here’s another document that confirms that typewriters still conformed to this formula in 1979. It also incidentally tells us that you got a much better warranty if you bought a Signature from Monkey Wards than you got when buying a Brother.

Sure enough, I checked the one Brother Wedge I do know the serial number and date for and the serial number matches the date the Service and Parts manual was published, and the date I had already figured out from other sources. Then, to the Typewriter Database to check the other two Brother daisywheels that are uploaded there, and they check out against the publication dates of their service manuals too.

There’s plenty of mystery still in Brother serial numbers. There are examples in the database that have no month code. I hit a few thrifts and saw one Brother wedge, which I took the serial number off, and was surprised to find it had 2 letters in its serial number. *sigh* 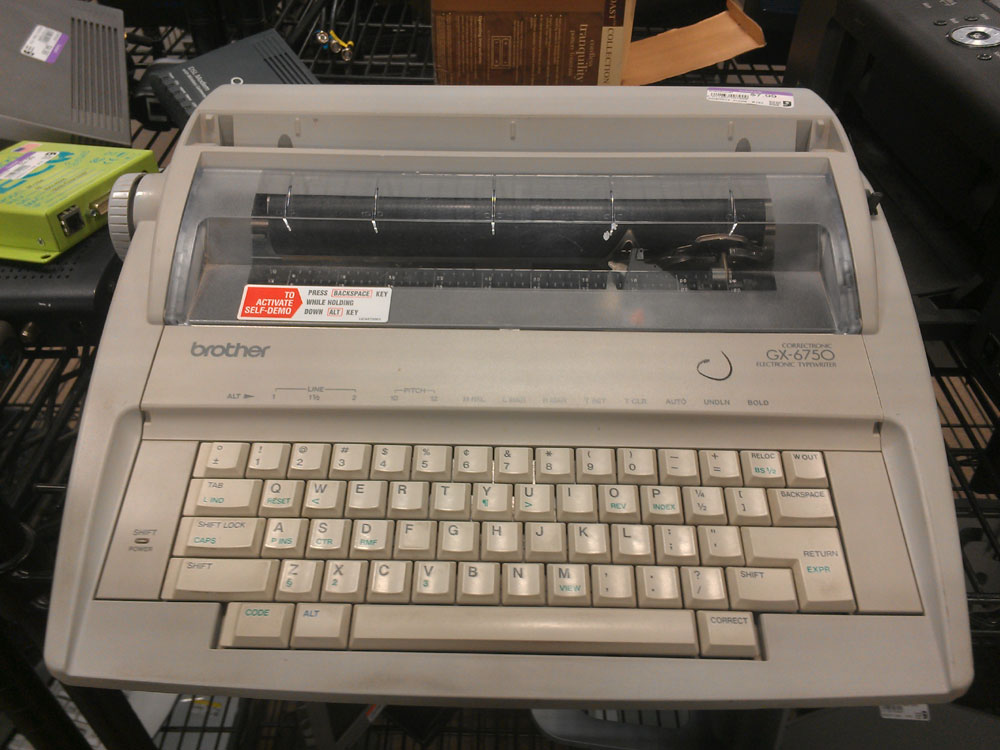 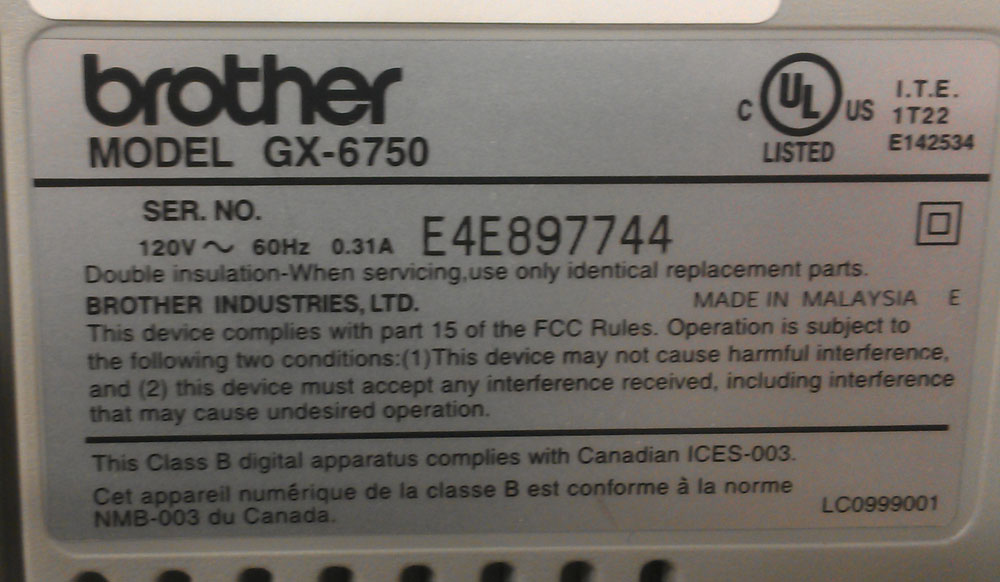 However, I think we have a bit more to go on, and things are starting to get a little clearer. Go ye therefore and date your wedges!

In other news, it’s dry season for nicely-priced typewriters in thrifts lately. The only thrift that seems to get typers is the North Goodwill, and ever since they put out that $99 SM-3 I mentioned a few posts ago, they’ve taken to slapping crazy-high prices on any manual typewriter including these: 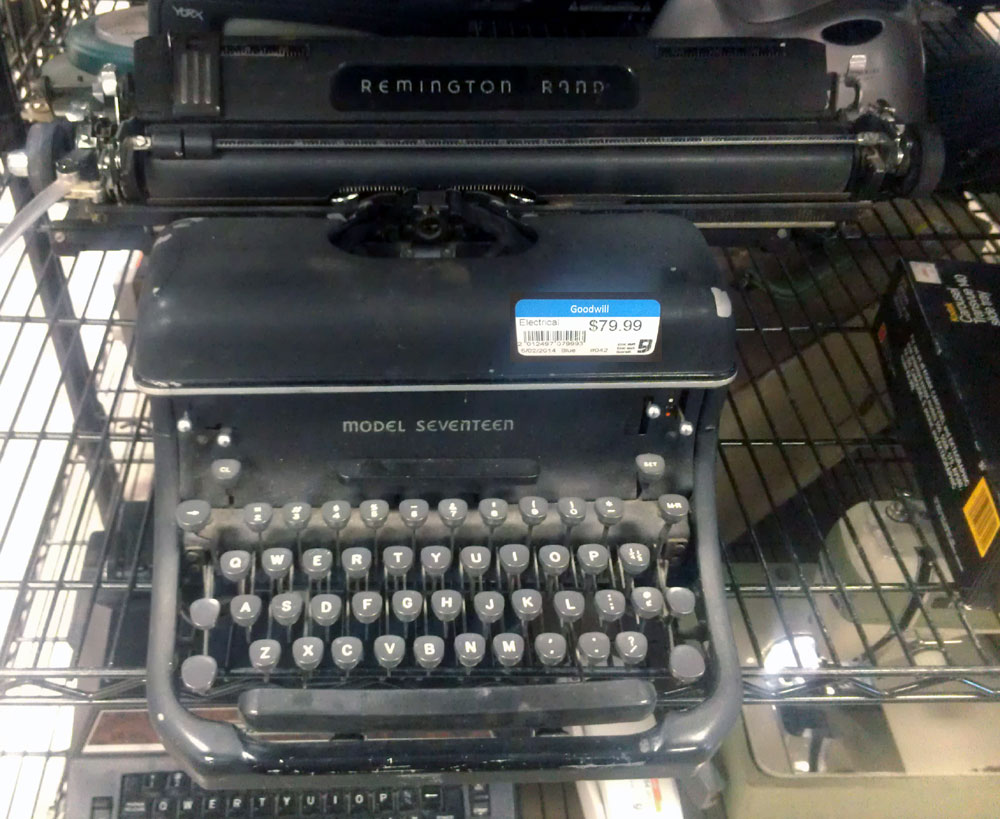 $80 for this wide-carriage Remington Seventeen? Not for me, no – but someone snapped it up within a couple of days. Me & Key snap aren’t the only hunters out there, and someone’s paying crazy prices… 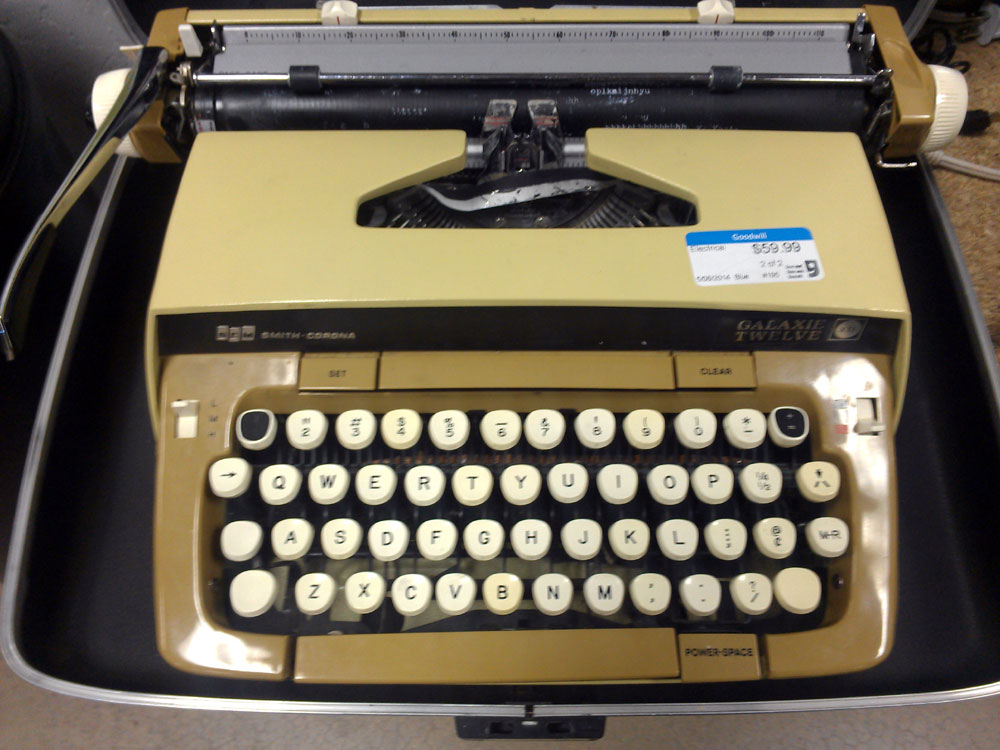 I didn’t end up empty-handed though. Today I finally found an Aceliner stapler at a thrift ($2). I’ll show that off once I get it cleaned up. It’s a fairly boring grey color, but it has the “Aceliner” embossing on the top, so I’m happy. Besides, it’ll match my grey typewriters.

What else, what else? Oh, yeah – the “Library” is now open at the Typewriter Database for logged-in Typewriter Hunter level members. Enjoy! There’s a few other things you might notice as well, but I forget what all I did over the week.

And here’s a revolving Olivetti for your pleasure. Hopefully Amazon won’t sue me for violating their new patent on taking photographs against a white background: