A man of the cloth and the steel he wields
munk
From the Desk of Reverend Munk, Model T Computing, The Laptop Collection
4 Comments 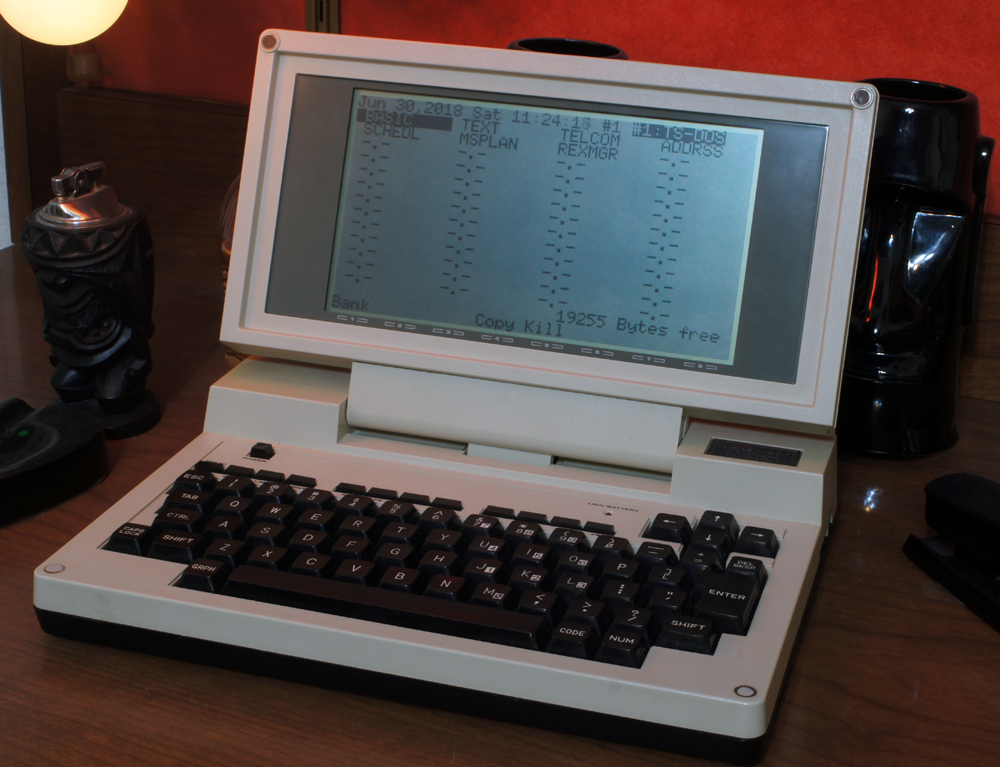 Tandy/Radio Shack Model 200 laptop computer , introduced in 1984, this example manufactured in January 1985. Still running strong, fast as a whip and useful in the 21st Century.

Well, I was too broke to spring for the NADSbox and REX200 when they were available, and regretted it for sure when the supply dried up and they couldn’t be had anymore. The NADSbox I can live without, thanks to mComm, but a REX200 was something I really wanted for my 1985 TRS-80 Tandy 200 laptop. Fortunately, you can get a Model 100 REX chip and convert it to use on the T200, and I found someone who happens to be selling what might be the last few available (3 left as of this writing). 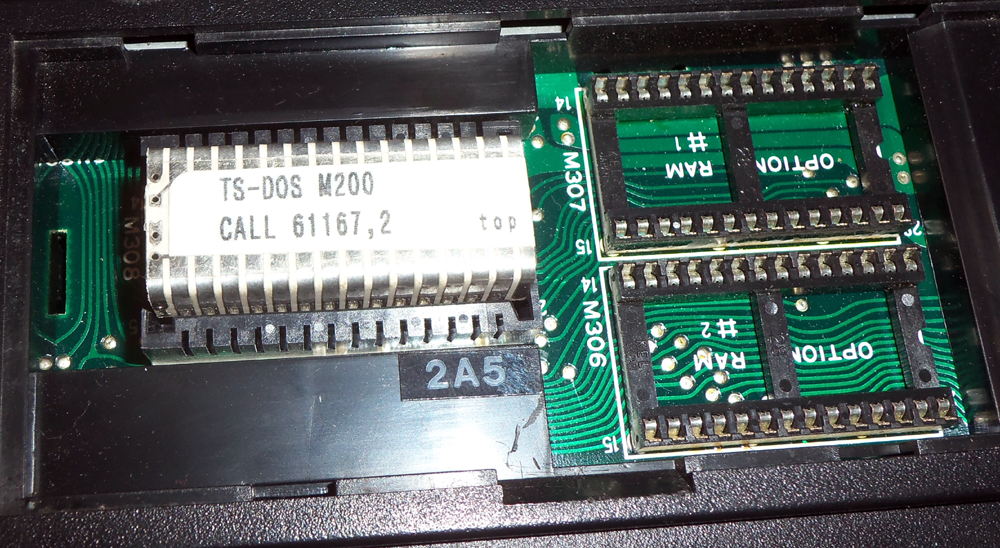 actually a photo of me installing the TS-DOS ROM into my other, older T200 – but you get the idea. Interesting, I just noticed that there’s a label in there with the machine’s revision number printed on it. Looks like my old one is a Revision 2A5, and my newer one is a Rev 12A4.

Now install the new REX chip, making sure that the white line on the edge matches the slot on the socket (IE: Pointed towards the extra RAM Banks). 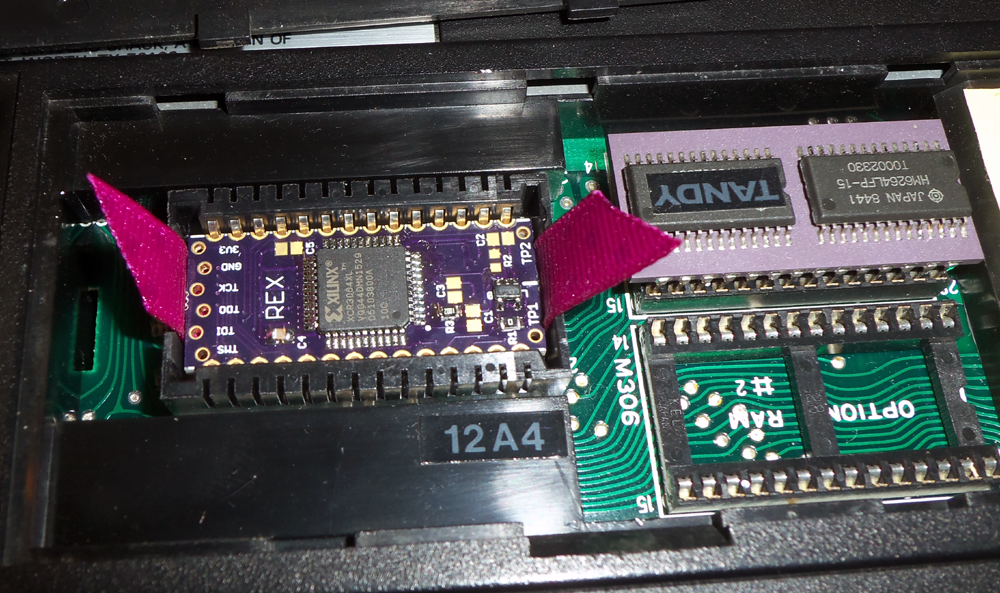 Once you have it buttoned up again, hook up your TPDD device and get it ready to talk to the T200. When we fire up the REX update program, it will query this connection and use it to load the new REX version (“RXF249.BR”) and TS-DOS (“TSD200.BX”) from the TPDD onto the ROM. Turn the machine on and go into BASIC and type CLEAR0,55000 <enter> to clear the RAM for the REX updater to run.

Exit BASIC <F8> and run the “rf249.co” program from the menu. Wait for the REX Updater to do it’s stuff.

Once RF249.CO completes, cold Restart the T200 – hold down <CTRL> and <BREAK> keys and push the RESET button on the back of the machine. When it comes back up, the “rf249.co” file should be gone. Power cycle the T200.

Exit back to the menu and you’ll see REXMGR there and “#1: TS-DOS” in reverse in the upper right side of the screen where the Microsoft copyright used to be. The Y2K fix will also be applied to the date. 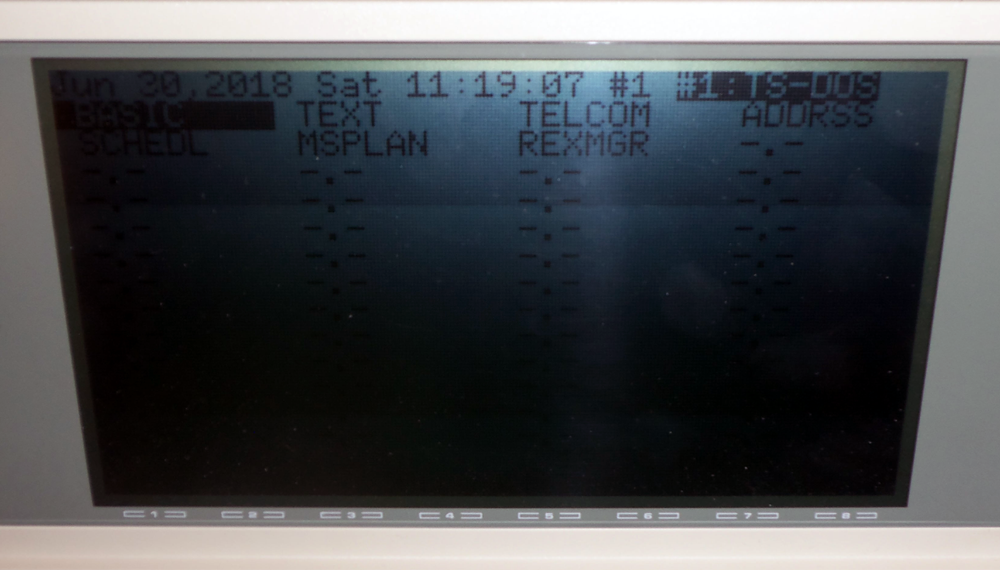 Yay! You’ve successfully installed a Model 100 REX into a T200 and updated to the correct firmware. TS-DOS is installed, but you’ll need to enter REXMGR, <TAB> over to the ROM screen and select it to make it show up in the root menu. While we’re in here, though, let’s load up all of the available T200 ROMs. There are 20 slots for ROM images, and with TS-DOS already loaded, you have 6 more ROM images to install to have the complete collection, leaving 13 slots for future ROM images, if anyone ever makes one. Download the zip file of all T200 Option ROMs, unzip the file and copy all of the ROM images over to the root of your TPDD device.

Cursor over to the empty slot and hit <F2> to load the ROM image of your choice to the slot, and keep doing it until you’re out of ROM images to load. Here’s a list of the available ROMs:

Whew! What’d that take, maybe 15 minutes? Easy peasy, and now you’ve got a seriously upgraded T200. Note that the REX’s memory is Non-Volatile, meaning it won’t lose data if it loses power, so the REX’s backups of your RAM images will not be lost. This makes my T200 into a much more serious powerhouse for not only text editing, but also the other projects I still do with the machine. Many more years of good life for this old mid-80’s Model T computer! (: