A man of the cloth and the steel he wields
munk
From the Desk of Reverend Munk, Model T Computing, The Laptop Collection
12 Comments

Always a fun thing to get, this box contained a brace of vintage writer’s slabtops, which Joe decided to downsize and send to me to add to my already varied collection of such machines. Constant readers of this blog will have noted my occasional article on my 1980’s Tandy laptops (TRS-80 Model 100 and 200s and my WP-2), my Alphasmart Danas and Neos, the NTS WP-10C, the Apple Newton eMate 300 and my QuickPad Pro – a collection spanning 3 decades of such machines with varying degrees of usefulness in 2021. Joe sent me back the WP-2 that I sent him some months ago, so that just re-enters my collection, but he also sent 3 other machines that he’s been playing with and has made videos of. Thanks to Joe’s generosity, new to my collection are: 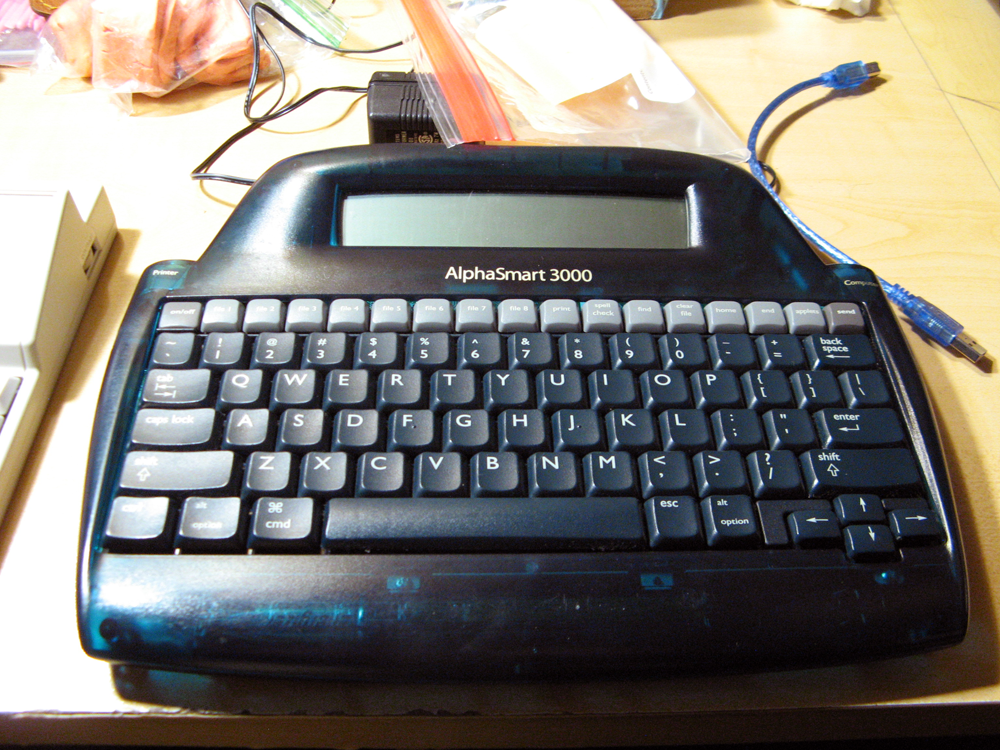 15 September 2020. A gift of Kim McIntire of Provo, Utah, along with The Writer Plus IR receiver (that works with The Keyboard Plus to input text to Mac), and the DreamWriter keyboard device.

This AlphaSmart 3000 sounds a bit plasticy and hollow, and some of the keyswitches are a bit slow to respond, needing some action to deoxidize their contacts, hopefully through some regular use they’ll iron themselves out.

I’ve just completed the initial video about Kim’s gift to my, titled “Christmas in September,” and it’s now uploading. I hope to do a series of videos in the near future about these products. Woo-hoo!][

What’s the difference between an AlphaSmart 3000 and Neo? I really don’t see much difference at all, in terms of features and functionality. May have to research this more.

Above is Joe’s thoughts on the AlphaSmart 3000, and I agree immediately about the hollow sound that this thing makes. The Neos and Danas do not suffer from this at all. The Alphasmart 3000 certainly takes it’s design cues from the Apple iMac era, and is made of materials quite similar to the Apple eMate 300. The keyboard is cheap-looking, but actually doesn’t feel as bad as it looks. The screen is pretty good too – not as nice as the DreamWriter, but has a good contrast 4×40 LCD. I can see the hollow sound getting annoying very quick in a public space, the A3000 is certainly the loudest writing slate I’ve encountered. Not the best for cafe writing, I’m sure.

I’ll come back to this machine later. I’ve installed a fresh set of 3 AA’s, and we’ll see how long they last. 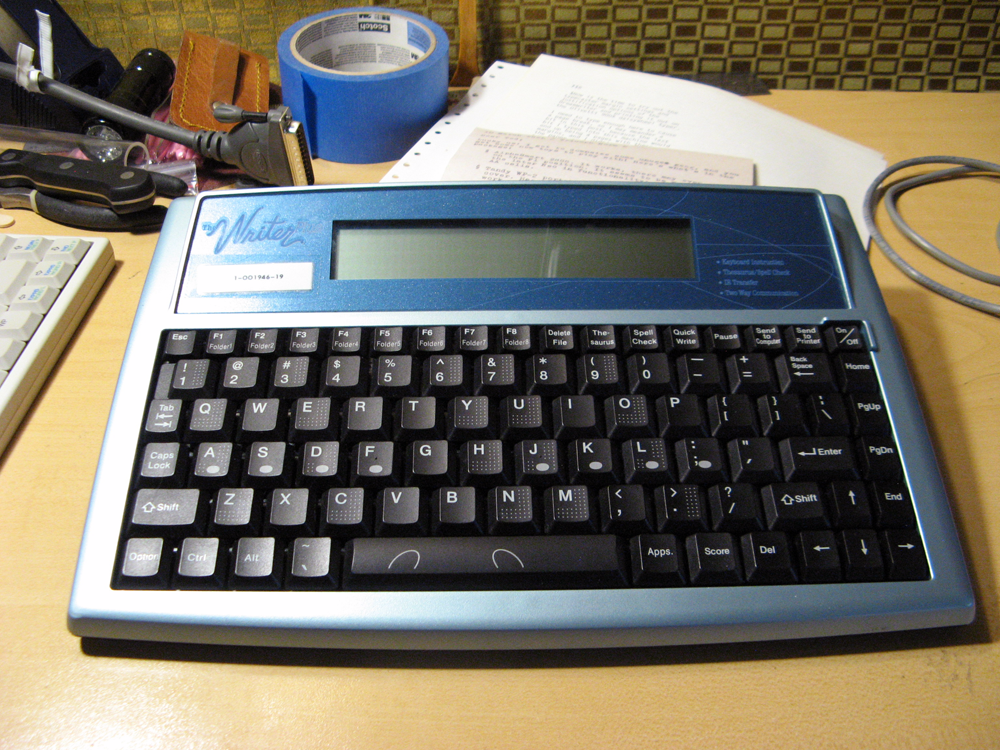 Ok, so I’ve reset the Writer Plus after installing some new batteries for it. We’ll see how long this set (3 AA) lasts as part of our test of this machine. When I first booted it up, I got these two error messages (pictured below), luckily the paperwork that Joe included addressed how to fix this condition: Hold <ESC>+<Z> and tap the <ON/OFF> button to turn the machine on. Keep holding <ESC>+<Z> for a couple of seconds, then let go. You’ll get an “Enter Password” screen, and you have to type ACE135 into it to reset the memory and clear the fault. Confusing, but at least it’s documented. 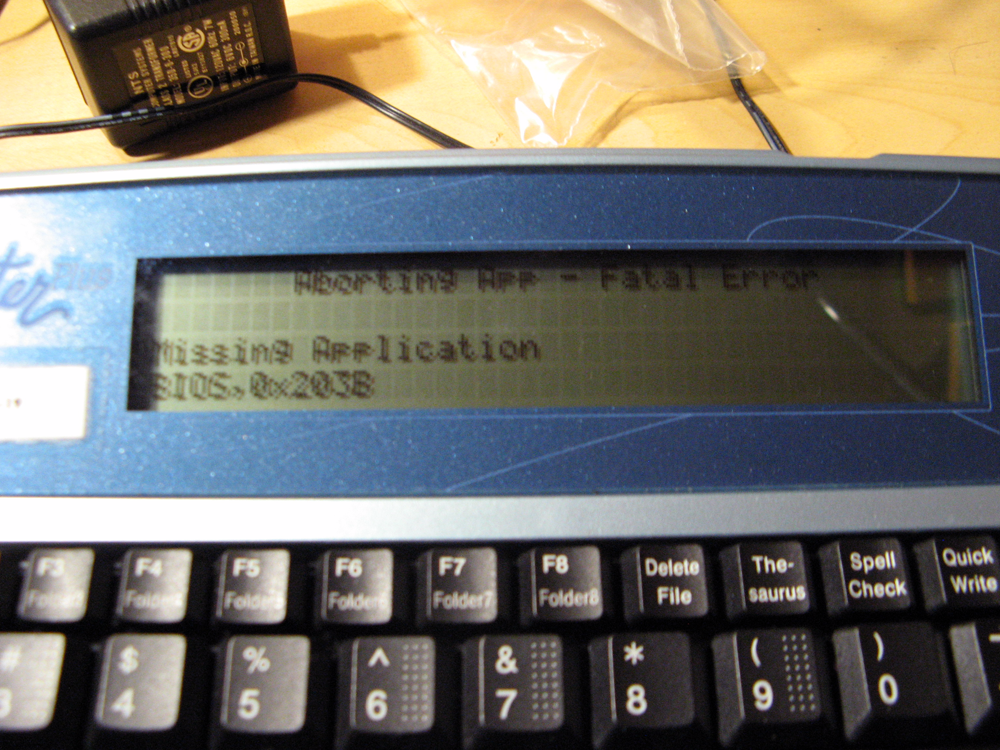 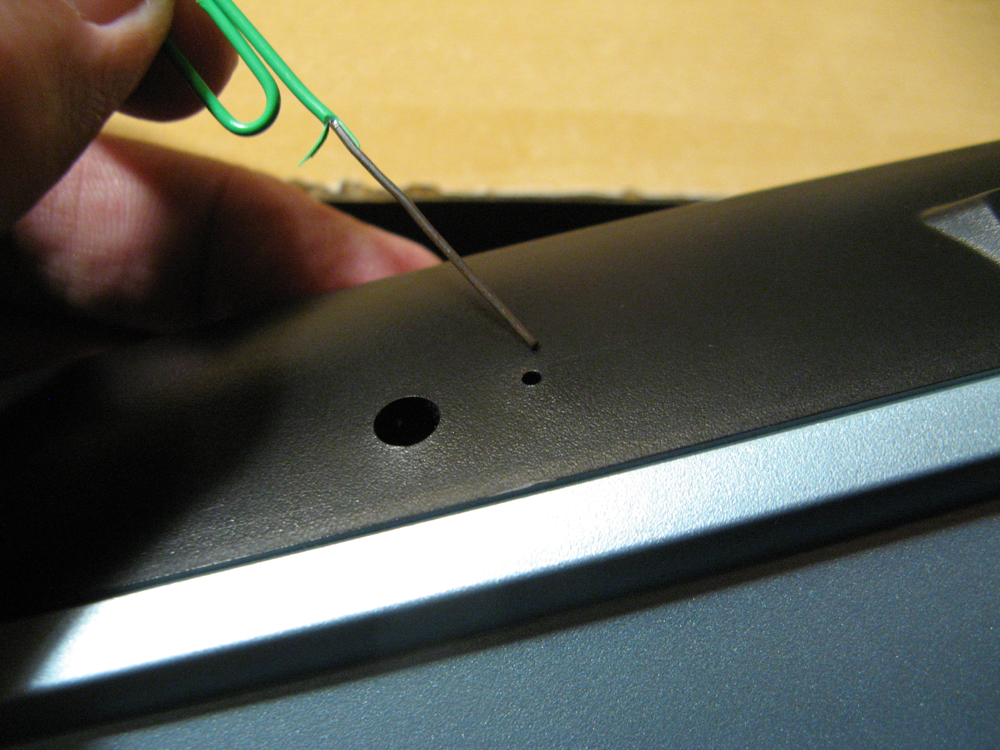 You’d think this little hole would be the hardware reset switch, but there’s nothing behind it at all.

The Writer Plus has a great keyboard and a fair screen (4 lines, 40 columns). As Joe has mentioned in his video on this machine, it is aimed squarely at teaching keyboarding in schools, and thus has a lot of setup asking about student and teacher names, and appends curriculum text to all of your files. (EDIT: actually, if you hold down the <OPTION> key when hitting <SEND>, the extraneous text is omitted from the output). That’s distracting, but not a game-ender. I’ll have to check connectivity with the IR receiver that Joe included. He was able to get it to work, so I’ll have to refresh my memory with a re-watch of his video.

Well, just plugging the IR receiver into the period-appropriate (ca. 2003) Dell Inspiron 5100, opening up a text file on the Dell and hitting <OPTION>-<Send to Computer> worked without any driver install. Basically, about as easy as an Alphasmart Neo as long as you have that IR Receiver. You hold down the OPTION key while hitting the SEND key and the Writer Plus won’t append all that useless classroom stuff to your textfile. That was noted in the instruction sheet, so again the documentation was essential to understanding how to work this writing slate.

As it turned out, my hunch was right. The IR receiver for The Writer Plus acts as a common “USB Human Interface” when plugged into just about any computer (even my Linux Mint 20 box) and translates the TWP’s IR output into plain USB keyboard input for the computer. Thus if you are lucky enough to score one of the Writer Plus IR boxes, you can confidently buy any amount of TWP’s and have them all transfer text as easily as an Alphasmart Neo, as long as you never lose the IR/USB receiver box.

This fact has upsides and downside compared to the Neo, Dana and other direct-USB wired writing slates:

Upside: totally wireless connection. Just leave the receiver connected to your Computer and all of your TWPs can connect just by being pointed at the IR box. No hunting for an old type A USB cord.

Downsides: The USB IR receiver is also the TWP’s Achilles Heel. Lose that box and you’re screwed. There’s no other way to get your text off of the TWP. 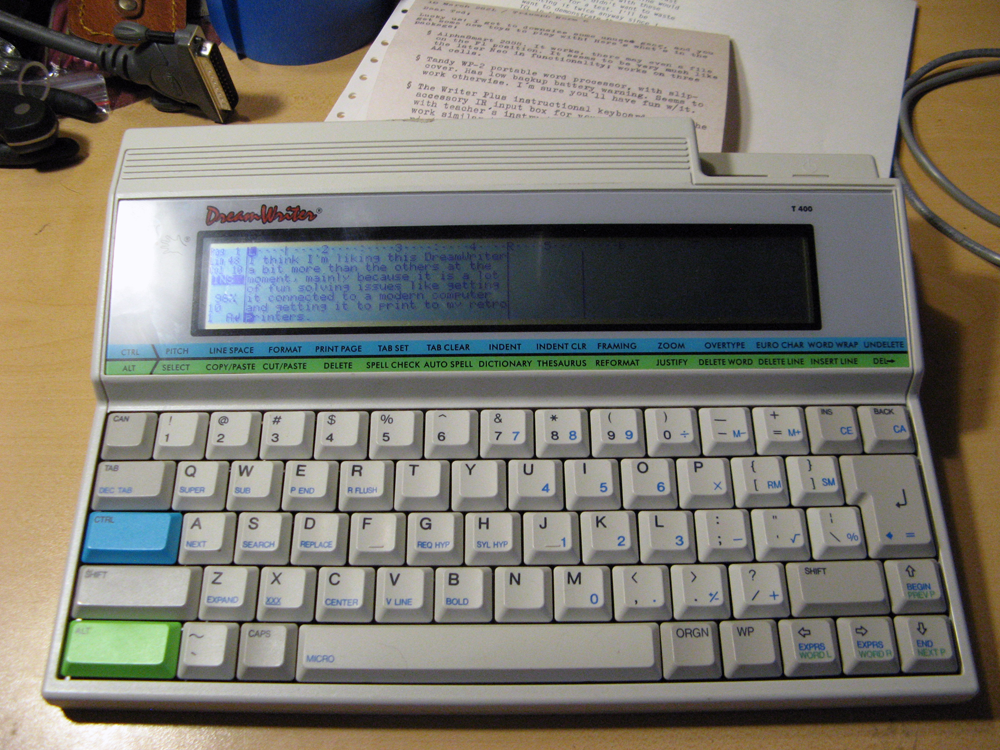 Here I am on the NTS DreamWriter that came in the mail today along with 3 other vintage writing slates in a package from Joe Van Cleave. I think he sent me all of his non-Neo slates, because one of the slates is the WP-2 that I had sent to him earlier. I am apparently the lucky beneficiary of a housecleaning & downsizing of stuff that Joe had some fun with (and made a few videos from) but was no longer interested in keeping around.

Which provides me with an interesting opportunity to evaluate even more writing slabs for the blog postery and maybe even some videos. I think there’s very little
chance that any of these will supplant the Alphasmart Neo as king of the cheap but excellent writing slates in my book, but I do enjoy variety, so it’ll be fun to explore these machines myself and compare them to the small collection of such vintage slates I already have. PCMCIA Type I card, and it fits in the memory slot on the DreamWriter, *and* it is recognized by the system, but won’t initialize, as the DreamWriter only takes 2bm cards. 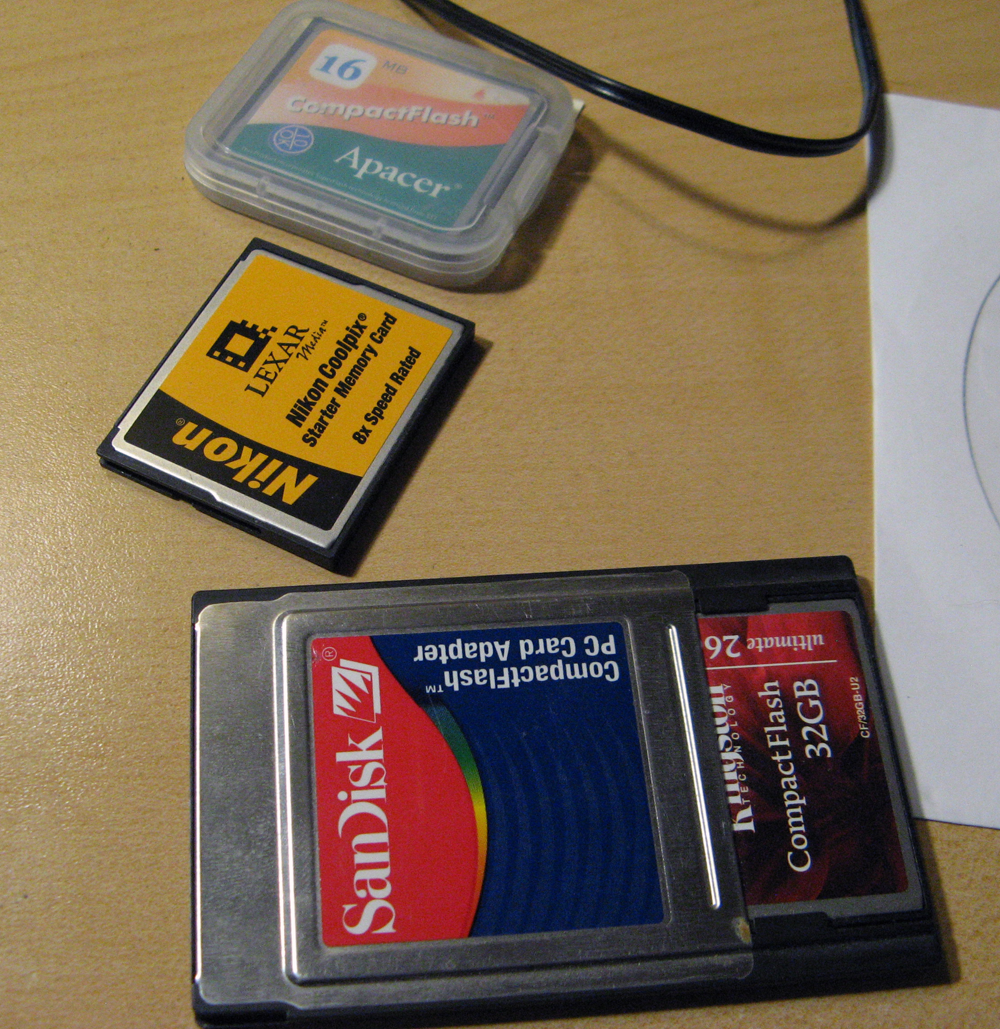 I didn’t have much luck with the DreamWriter connectivity-wise at first. It only takes Type 1 PC cards of less than 2mb, and my only Type 1 is a 4mb version and doesn’t work in the DreamWriter. I also managed to install the DreamLink software on an old Pentium 1 with Windows 95 (the software wouldn’t run in Win98, and in fact, freezes the system on launch), but despite trying many different serial cable configurations (straight, Null Modem and even tried my Tandy WP-2 cable), I was not able to get the DreamWriter to connect to the transfer software on the period-correct PC and OS. I’ll bang on that some more later.. 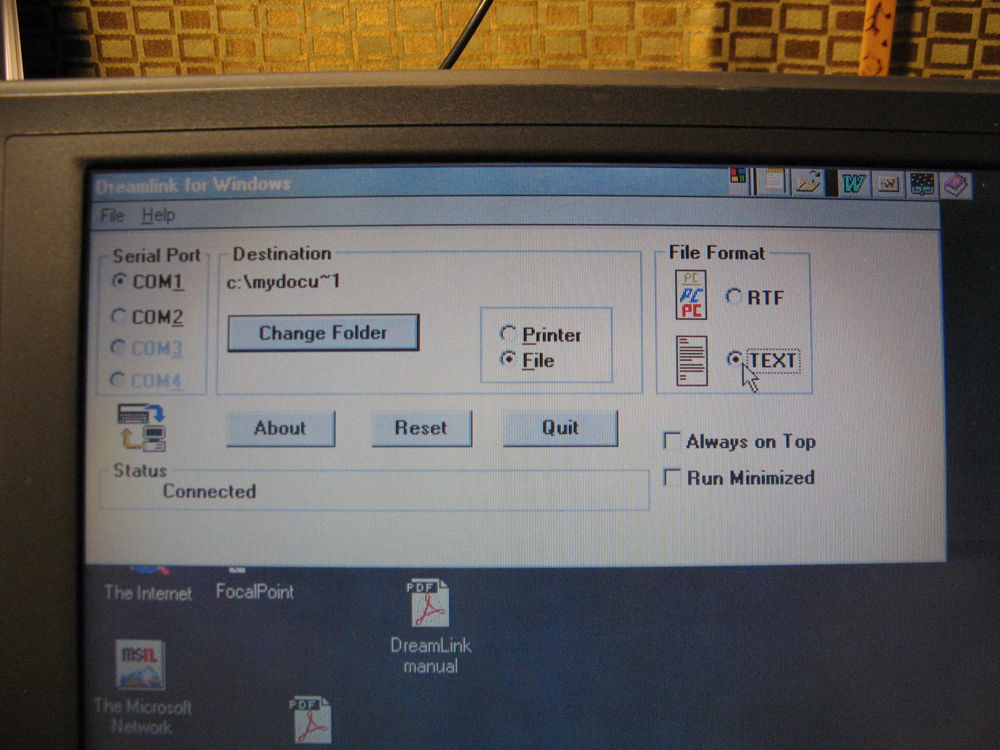 Well, it turns out that I can connect this DreamWriter to my main Linux computer fairly easily via serial-to-USB converter connected to my old Tandy WP-2 Serial null modem cable. So, the DreamWriter can do pretty easy text transfer, with the caveat of needing connection cables that might be difficult to find, but at least it would be easy to make yourself, just follow any tutorial that shows the wiring diagram of a 9 pin to 9-pin (F/F) Tandy WP-2 style null modem cable. More on that later when I do a detailed review of the DreamWriter. 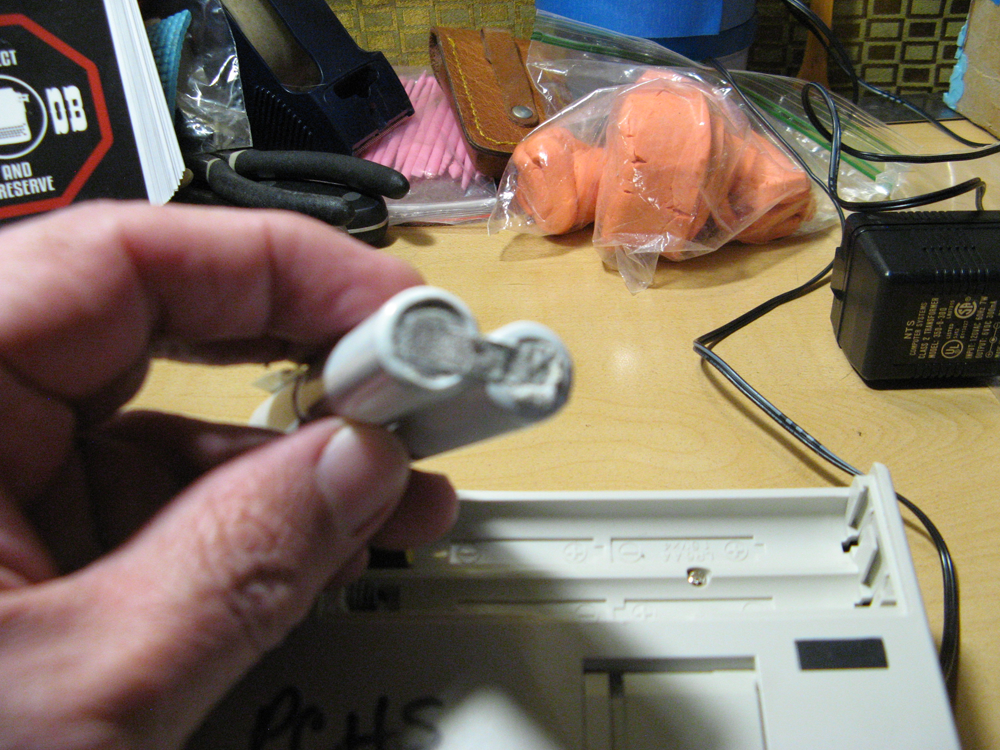 Luckily, it’ll take regular AA batteries, if you can bridge the missing coils on one side of the battery compartment. This is no problem – I just used a folded-up bit of aluminum foil. I should note that the power in my neighborhood flickered a bit while I was typing this, shutting down all the main computers in the house, so because I was typing on this battery-operated DreamWriter, I didn’t lose what I was typing. I did lose light, so I went outside and typed a bit more by the light of a street lamp, which immediately highlighted one of the strengths of the DreamWriter – the really excellent contrast, roomy screen. I could read the screen even from very indirect, yellow and dim light. That’s not something you can do on a lot of these vintage slabs, and the 8 line by 80(+) column screen is bigger than anything short of the Alphasmart Dana and the Apple Newton eMate 300. I say 80(+) because you have 80 columns to type in plus another 10 spare on the right side that you can utilize by changing the right margin, if desired, and 6 more columns on the left that display page and line numbers, columns, the amount of memory remaining and a few other things I won’t understand until I’ve opened up the user manual, which Joe included on a CDRom. That’s a *lot* of screen space for one of these slabs. There does not seem to be a backlight, which the Dana does have, but I think the Dana and the Apple Newton eMate 300 are the only ones that do have
backlit LCDs. Another point in the DreamWriter’s favor is the very nice keyboard. It’s full-sized and all of the important keys are exactly where you expect them to be. <ALT>,
<CTRL> & <CAPS> are mixed up, but they don’t really count, as they’re used mainly as control keys and are color-coded to the labels on the keys.

The DreamWriter also has kickstand legs in the back that can be extended to lend the slab a better viewing and keyboard angle. They’re a little flimsy, but they’ve stayed intact since 1996, so they prolly aren’t as flimsy as they look. 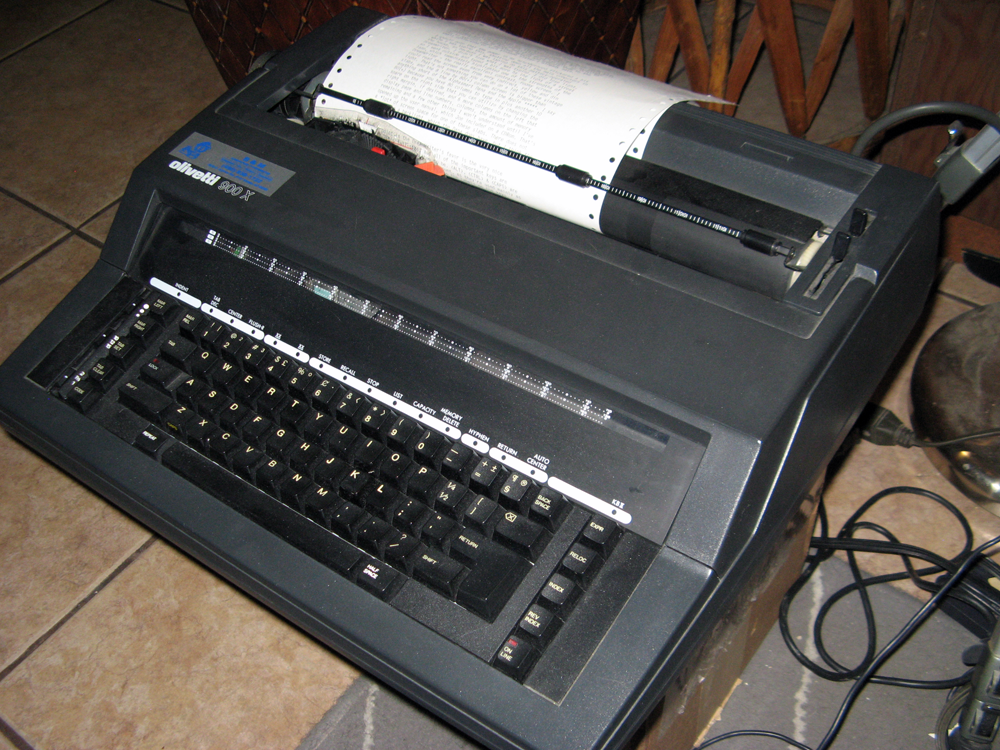 So, I just hooked this DreamWriter up to my Olivetti 900X daisywheel typewriter via the Centronics parallel port, and it typed (almost) perfectly, first shot –
even properly figuring out where the page breaks are and skipping past the perforated part of the fanfold paper I’m using. Excellent! I’m liking this DreamWriter more and more as I explore its features further. I notice that Currie mentioned my 900X this morning, so it should be fun to show off the two machines grafted together. :D

Sadly, the DreamWriter only has 7 printer drivers built in, and non of them are straight text output for line printers like a daisywheel typewriter. This is the output from the Epson FX driver, which outputs the least control/garbage codes.

I’ll be reviewing each of these machines as I play with them a bit over the coming weeks. Joe has lit a fire under me to do a proper comparison of all of the many writing slates I have in the collection, and rate them by various features and figure out which ones have utility today. I mean, I doubt anything is going to unseat the AlphaSmart Neo as king of the hill, but let’s us have some fun trying, eh? (:

Typewriter Club Live, March 13, 2021 – where I show off all the slates in the collection, briefly: